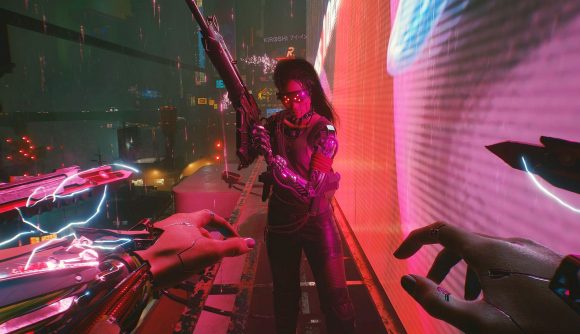 The Cyberpunk 2077 release date is finally arriving this week, and after such a long time, it's almost hard to believe that it's really here. The review embargo has now lifted in most areas, which means the scores and impressions are rolling in. Here's what the critics have to say about CD Projekt's latest magnum opus.

After a hype cycle that's gone on for years, it's almost impossible to imagine Cyberpunk 2077 living up to the expectations it's set for itself. And in fact, our Richard Scott-Jones finds that while it is an exciting and engrossing vision of the corporate-dominated future, it never quite as groundbreaking as its unending marketing seemed to indicate. Read our Cyberpunk 2077 review for more of his thoughts – they're largely positive, and he's awarded it a 9/10. And, if you're ready to jump in, you can pre-order Cyberpunk 2077 from the Humble Store.

That said, even after a large 'day zero' patch, Cyberpunk 2077 is plagued with bugs. That's impacted some review scores more than others, but most of the critics have at least mentioned the fact that there are visual glitches, physics snafus, and save corruption issues galore in the open-world game set in the glittery neon future of Night City. Even so, Cyberpunk 2077 is looking at some extremely strong scores across the board.

Here’s a selection of Cyberpunk 2077 review scores from around the ‘net:

A respectable showing, then – several perfect scores, with several reviewers dinging Cyberpunk 2077 for its bugs, and a few pointing out that it’s more conventional than many had hoped.