There are many ways to tackle any situation in Cyberpunk 2077, and there are occasions where stealth (or not being seen) is the way forward. You’ll need to observe an enemy’s movement for opportunities to take them down, clearing the path between you and your objective.

This is easier said than done though. With all sorts of technology at their fingertips, from security cameras, cyber enhancements, and even robots, it may be more difficult than you would expect to infiltrate whatever the enemy is guarding. If you’re speccing into one of the Cyberpunk 2077 builds that’s focused on stealth (the Cyber ninja build is particularly attuned to this style of play), then you’ll have your own tricks up your sleeve when enemies get too close to finding you.

However, just having the right gear and perks does not make you completely invisible to the enemy. It’s vital that you know exactly how stealth works, what any character can do in order to not be seen, and the best places to hide any bodies that you’ve knocked out.

First things first, you can’t possibly be stealthy if you’re walking around casually. You need to be as low as possible, so you should be crouching at all times (the default key for this is C). There are also various Cyberpunk 2077 perks that can help you, including specific perks in the Stealth tab of the Cool Attribute. Crouching Tiger increases your movement speed while crouched by 20%, while throwing knives provide a silent way to take down enemies. 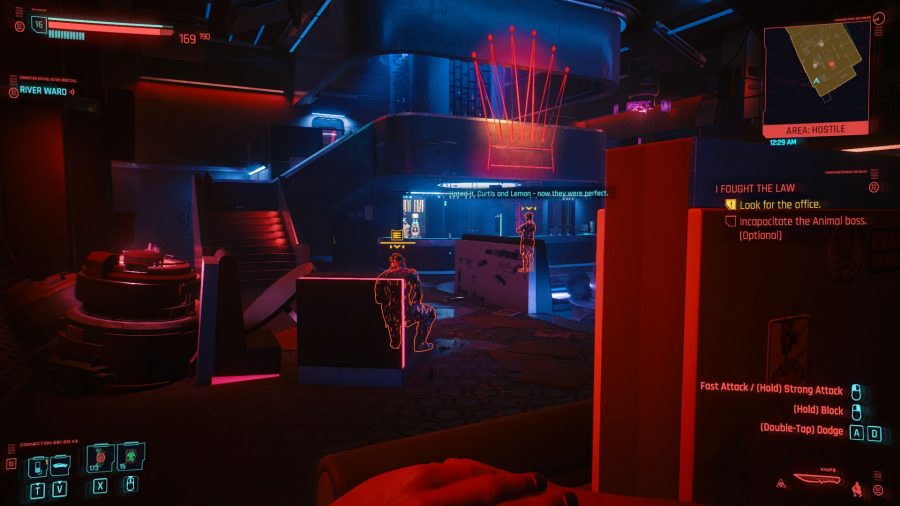 Enemies can be in two states: combat and alerted. While in combat, the enemy is actively attacking you. They will automatically target the last known position of either you or an ally, whichever they are targeting.

If an enemy loses track of both you and any allies that have joined you on a mission, they will revert to an alerted state. Any enemy that is alerted will patrol the area to try and find you, which in turn makes it much more difficult to sneak around and take them by surprise.

If you need to make a quick getaway because the enemy fighting you is too strong, it might be worth inflicting one of the many Cyberpunk 2077 status effects. Blinding enemies is particularly effective as they have reduced threat detection. This also hinders their movement so you’re able to outrun them and hide in a nearby location.

You could also use EMP effects to temporarily disable or severely limit any mechs, drones, or robots. The Breach Protocol perks are particularly handy for dealing with cameras and turrets. 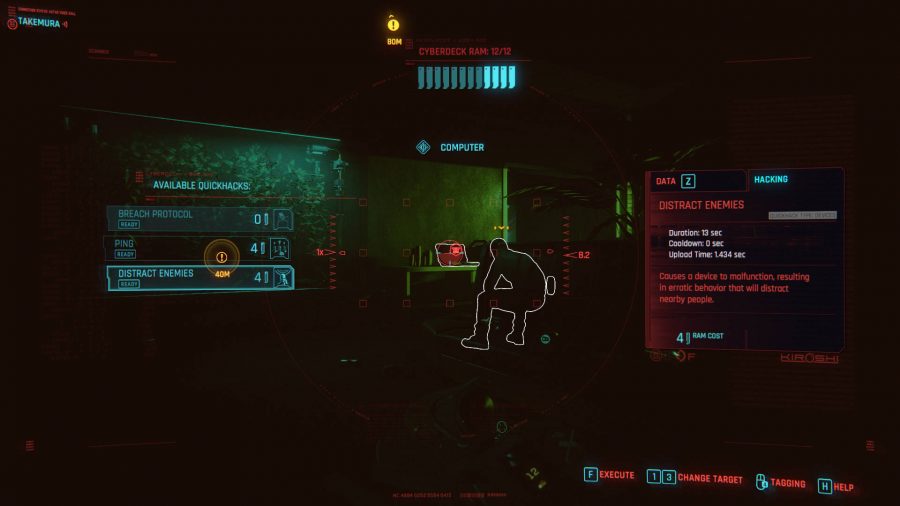 Sometimes, there’s no obvious way around an enemy so you’ll have to get a little creative. The first thing you should do is observe any enemies that are patrolling for moments where you can sneak past them, but if there’s little wiggle room you can use gadgets or devices to divert them from their patrol (more on this in our Cyberpunk 2077 quickhacking guide). If an enemy is distracted, they will have a white outline.

Other things that distract enemies include any silenced gunshots or any human footsteps they hear, and they will try to locate the source if they hear them. Anything louder than this, such as an unsilenced gunshot, shouts from actions that initiate combat, or even the sound of a dying foe, can put nearby foes in either combat or alerted states. 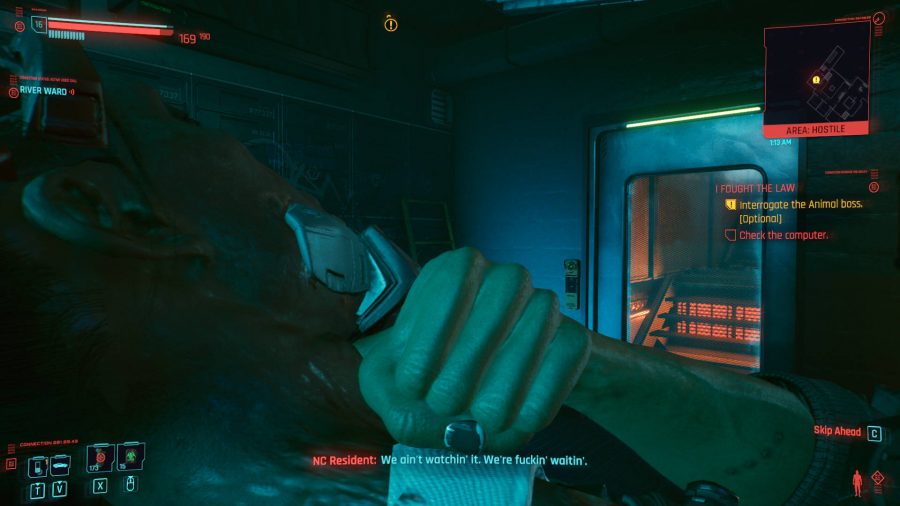 One of the advantages of sneaking around is that you can grapple with enemies who are oblivious to your presence. You can do this by creeping up behind them and pressing the F key. While you are grappling the enemy, you will still be able to move around with them for a short time, but you’ll also have the option to either kill that enemy by pressing F, or knock them unconscious by pressing R.

When an enemy is being grappled, they will struggle to break free from your grasp. This means you can’t hold an enemy hostage for long, as the longer you grapple them, the higher their chance to break free will be. Your own Body attribute level affects how long you will grapple with an enemy. You can also acquire certain perks to bolster your ability to hang onto a foe for longer.

While you can’t grapple enemies that are a higher level (they’re marked with a skull if this is the case), you can still perform stealth takedowns. This is harder to do though, as they’re more likely to react violently should they detect you. Using a combination of abilities, gadgets, and the environment itself can help you take them down. This is also possible with bosses, but you may need to perform multiple stealth takedowns to eliminate them.

When you do take out an enemy, make sure to conceal the evidence. If an enemy or a security system notices an unconscious or deceased body, they will permanently be put in an altered state. To pick up an unconscious/dead enemy, hold the R button. You can then dump the body by pressing F. If you pick up the Clean Work perk, you can immediately pick up the body by holding E after performing a takedown.

If you stand next to a container that can hold them, you’ll get a dedicated prompt on-screen to dump the body there instead. Upon placing enemies inside the container, any loot that is on the body will appear in front of the container, but will not alert an enemy to the body in the container. Dumpsters are a great place to get rid of bodies, but any container has a limited capacity. Once you place a body inside a dumpster or similar location, it can’t be removed.

Related: Here are the best RPGs on PC

Occasionally it might be impossible to find a suitable container. If that’s the case, you can attempt to get rid of the body by placing it in an area that’s not on any patrol path, or out of the line of sight of cameras and other security facilities.

That’s all you really need to know about stealth in Cyberpunk 2077. There’s plenty of other guides for this mammoth of a game here at PCGamesN, from details for the locations of Cyberpunk 2077 iconic weapons, to the full Cyberpunk 2077 map. If you’re still on the fence about whether or not you want to buy the game, you can check out our Cyberpunk 2077 review to help make up your mind.