The Woman of la Mancha gig in Cyberpunk 2077 is one of the first jobs given to you by a fixer in Night City. You might not think too hard about the repercussions of your actions after completing this relatively short gig, but there’s quite a lot to consider. You’re tasked with putting a stop to Anna Hamill’s investigations surrounding a black market in Kabuki. The contractor doesn’t care about how you handle the situation, as long as the deed is done.

The fluid class system in Cyberpunk 2077 gives you the opportunity to approach this scenario in a number of ways. If you’ve gone for a Cyberpunk 2077 build that focuses primarily on hacking, you can bypass elements on the gig. Likewise, with access to cyberware like Boosted Tendons, your double jump ability will make quick work of any vertical environments.

To make things even more complex, your Cyberpunk 2077 life path can give you access to unique dialogue options to provide additional solutions. We’ve broken down every option in this gig to ensure you’re happy with the final outcome. This guide does contain spoilers, so only read on if you’re happy knowing every outcome and what’s required in the Woman of la Mancha gig.

Your first step is to find out information about Anna’s whereabouts. There are three NPCs you can talk to, each featuring specific requirements. You also have the option of bypassing the NPCs entirely by tracking down Anna on your own. You can utilise the Kiroshi Optics scanner and quickhacking cameras around the market to spot Anna at her hotel room window.

Eve the prostitute knows where Anna is, though you’ll have to pay her some eddies before she tells you anything. Robert the ripperdoc also knows where Anna is staying, you’ll need to have a high enough Street Cred level to speak to him. There’s a Nomad in the middle of the marketplace who will tell you what you need to know for some eddies. Nomad players have exclusive dialog options to get this information for free. 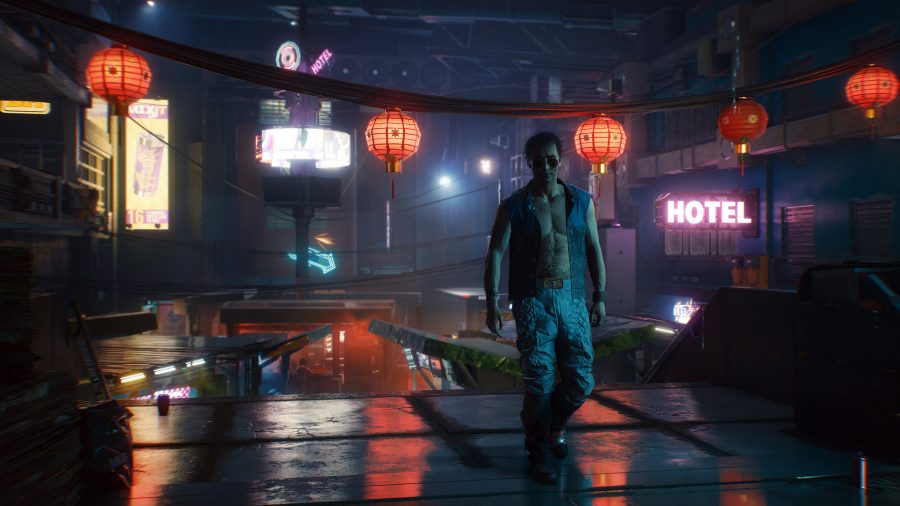 Breaking into the hotel

You’ll learn from the NPCs that Anna is located in the nearby hotel that overlooks the market. Once you’ve found the hotel, head to the side room near the front entrance. There’s a hackable terminal which reveals the records of every hotel guest.

Opening Anna’s hotel door will require a certain amount of investment in the technical ability attribute, but if you don’t have that, there are other ways to get to her. You can pay to rent a room in the hotel, allowing you to easily reach Anna’s room from the stairwell. If you don’t have the eddies to buy your way into the hotel, you can scale your way up the hotel using the double jump ability from the Boosted Tendons cyberware.

Anna will be angry with you once you finally meet up with her, but you can calm her down by warning her that she’s in danger. If you’re looking for a fight, you can initiate combat with her straight away. Try to keep the fight contained to the hotel room as Anna will receive back up from the Tyger Claws gang if other people find out what’s going on. Killing Anna without alerting anyone will allow you to walk around Kabuki without any issues.

Calming Anna down will cause her to leave Night City, though the story doesn’t end there. While you managed to avoid fighting with Anna, that doesn’t stop her from going on a killing spree against all the people that wronged her. You’ll find a dead policeman located near some trash cans in the market shortly after completing the gig, along with a brief note from Anna and her colleague. Paying close attention to news bulletins reveals Anna was later killed during her murdering frenzee.

The only way to save Anna’s life and the lives of others is to offer her a lifeline through the Aldecaldos gang. Unfortunately, this option is exclusive to Nomad V. If you want to take the utilitarian approach, killing Anna will spare the lives of corrupt policemen thus saving the most amount of lives.

And that’s all we have for the Woman of la Mancha gig. If you’re looking for more gigs to earn some eddies and Street Cred, head on over to our Sweet Dreams and Flying Drugs guides.