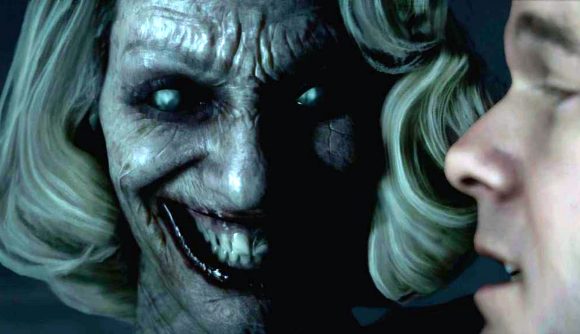 The third game in Supermassive’s ongoing The Dark Pictures Anthology of horror adventures, House of Ashes, isn’t out until October – but now it looks like the title for the fourth game in the series has already been leaked: The Devil In Me.

The title was found out as the developer appears to have applied for a trademark for The Dark Pictures: The Devil In Me, as spotted on the website Justia Trademarks. The applicant is indeed marked as Supermassive Games Limited, and there’s even a logo for the game on display – complete with a little magnifying glass attached to the extended letter ‘V’ in “devil”.

As for what the next chapter in The Dark Pictures is about, that’s less clear, as the only details in the trademark are a thorough description of the logo. However, the title does bring to mind the latest movie in The Conjuring horror franchise, this year’s The Devil Made Me Do It – which dealt with a case of supposed demonic possession being used as a legal defence.

Unfortunately, there’s very little to go on, but one thing that can be confidently theorized is a rough release date. All the Dark Pictures games have released a year apart, with Little Hope out last October and House of Ashes due the same time this year – so it seems likely The Devil In Me may be out around October 2022, if the pattern holds.

Deep underground, something evil has awakened.

Descend into the underworld in The Dark Pictures Anthology: #HouseOfAshes, coming to PS4/PS5, Xbox One & Series X|S and PC on 22 October 2021.
Pre-order: https://t.co/AIOLK4cGdU pic.twitter.com/UkKw21l5VS

Supermassive has mapped out a total of eight games in the Dark Pictures Anthology, so there are still four more chapters to go after The Devil In Me – if that is indeed the title. We’ll probably find out more next year, but this year’s House of Ashes is already looking very promising – pitting a group of soldiers against a very real monstrous threat.