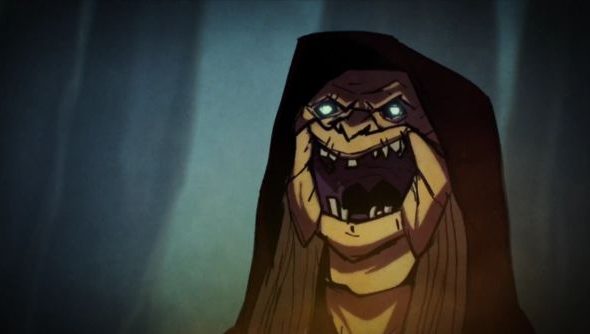 Been avoiding Dark Souls 3 spoilers like the plague but still want a professionally made injection of excitement for one of the year’s biggest games? Bandai Namco have your back. Eli Roth, known for his work on the Hostel films as well as various cameos throughout comedy-horror, directed an animated short titled The Witches about a poor knight meeting his grisly fate. There’s also a second, unrelated trailer that presents Dark Souls 3 in an 80s, VHS style. Both are quite excellent.

Of course, if you do want to know more, here’s the beginnings of our Dark Souls 3 PC review.

Here’s Roth’s effort – while there isn’t a hint of spoiler to it, it’s definitely not for younger audiences or those that don’t like thinking about having their face mutilated by crows. You’ve been warned.

Thankfully orange goo and being turned into a giant hellbeast are my favourite things, so this didn’t squick me out at all. Nope. While it’s not exactly a direct tale from the game, it’s certainly in theme with the series, especially this third iteration, of everything being awful forever.

Bandai have also released a behind the scenes featurette, including interviews with various people involved in the project. Unsurprisingly, it involved a lot of drawing andplaying‘researching’ Dark Souls.

Roth saying he’d like to do more is interesting. I’ve always been surprised there isn’t an official Dark Souls anime, be it a series or a feature-length movie, even one produced by a western studio. I don’t know what story they’d go with, be it just be a stylised retelling of the first game’s journey or some background event within the world, but it seems prime for that sort of multi-media expansion. From a purely mercenary point of view I’ve no doubt it’d make its money back, and the practice was quite popular with various IPs, particularly from Electronic Arts, a few years back. Maybe Roth’s the person to lead it.

Meanwhile, a second, even stranger trailer has popped up. It hasn’t appeared on any official channels, but seems a mite too professional to be fan-made. It presents Dark Souls 3 as an schlocky 80s horror-action flick, and it’s absolutely brilliant.

I’m no big 80s fan, but I adore this. It doesn’t push too hard into the cheesy while still poking fun and the crap-o-vision filter fits perfectly with the art style. I’ll take one of these for every game in development, please.

Game’s out officially in English on April 12th, though Steam’s listing it as April 11th at 11pm my local time. Probably launching at midnight server-time in the various western regions, hence why Namco are saying the 12th. Expect some more exact details on that in the run-up to release. Either way, can’t come soon enough, really.