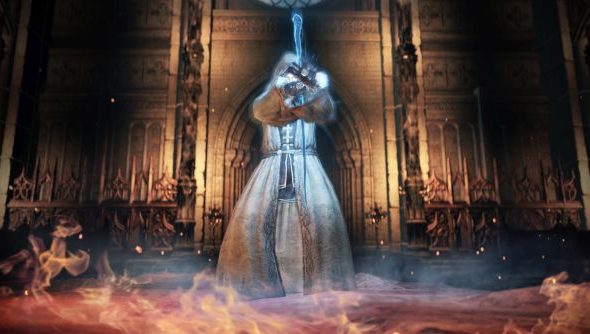 Rejoice and praise the stunningly obvious meme that I refuse to bow my head to and accept is the inevitable conclusion of this, Dark Souls 3 is not capped at 30 fps on PC. In fact, From Software are targeting 60 fps for their latest die-and-die-again simulator. It marks a rather big change from the infamously terrible port of the first game, which required a long and storied series of fixes from modder Durante to get working acceptably.

Probably our most anticipated of the upcoming PC gamesright now.

The news comes via the game’s official social media, with the following tweet posted last night:

As well as a Facebook post promising the same. The community has been rather pleased, especially as it would hint that as much time and effort is being taken over this port as was done to Dark Souls 2. While there were a couple of bugs in that game, it ran flawlessly on a number of machines, including my PC that was upwards of five years old at the time. Hopefully 3 can do the same, despite the move to a new-gen engine. If it doesn’t, at least there’s a legacy of modding and fixing the game from its incredibly dedicated community, who will doubtless be pushing it past 60 as soon as they can.

In case you missed it, we had a pair of Dark Souls 3 previews go up recently. First, an analysis of the opening hours and why we think it could be the best Dark Souls yet. Plus, we broke down how it’s going to avoid fatigue with the hardcore formula. We’ll have much more as we march towards release in a month on April 11th.