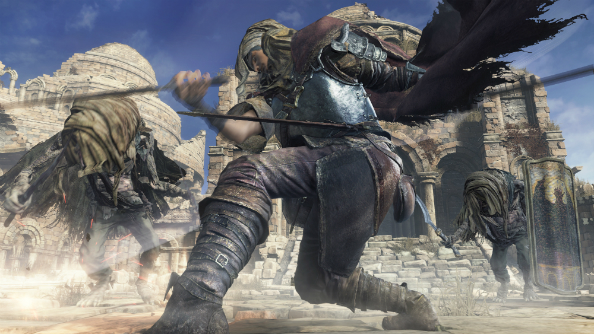 Dark Souls 3’s release date may not be until April 12th (at least in the West), but that hasn’t stopped some enterprising scamps from getting their hands on From Software’s latest hack ‘n slasher early… getting it early and seeing off the first boss with ease… seeing him off with ease while using nothing but their hands. That’s wrong on oh so many levels. Ah well, at least it gives you the chance to see the PC version of Dark Souls 3 running at a glorious 60fps.

While you count down the last few agonising days until Dark Soul 3’s release, check out some of the best upcoming PC games.

The video below sees the player battling Iudex Gundyr; the game’s first boss, and a fiend you must vanquish if you’re to make it to the Firelink Shrine. After your warrior is revived in the Cemetery of Ash as ‘Unkindled’ – think the original game’s ‘Chosen Undead’- this brute offers one of Dark Souls 3’s first frightful challenges:

Apparently, Gundyr is weak against fire attacks. That, and being boxed to death by an annoyingly good player who got their hands on the game nearly two weeks before the official worldwide release. More importantly, though, there’s no denying the action looks so much better at 60fps. After somewhat struggling with PS4’s choppy (if still brilliant) Bloodborne, it’ll be nice to return to the stabby, yet smooth shores of a Souls game running at a locked frame rate.

Our man Fraser is currently putting From’s majestic slasher through its paces in our Dark Souls 3 review in-progress. It’s shaping up to be a barbaric belter, which is only fitting considering Steam tells me I’ve played its two predecessors for a combined 168 hours.