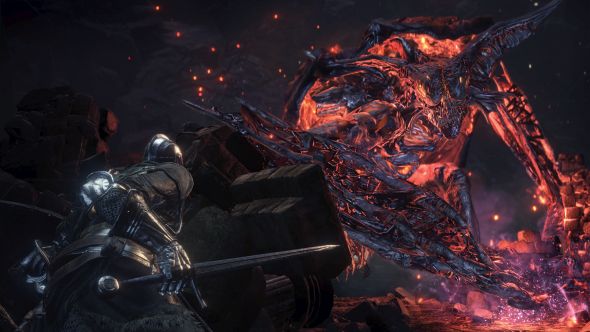 Footage of one of a boss fight in Dark Souls III’s forthcoming DLC, The Ringed City, has apparently leaked. The fight has already been featured in trailers, so you probably knew it was coming, but if you’re desperate to go in blind or to avoid positively all spoilers, best not to read any further.

We reckon the original Dark Souls is one of the best RPGs on PC, though number three is pretty great too.

If you’re still with us, the fight wasavailable here, but as you can see, it’s been DMCA’d, and we’ve been unable to find a mirror. You can see some official footage of the fight in the most recent gameplay trailer, otherwise, you’ll just have to rely on our notes for details.

The fight takes place at the bottom of a long drop at the edge of an area called The Dreg Heap – lore nerds might remember that Human Dregs, associated with the Aldrich Faithful covenant, are described as “the heaviest things within the human body”, which will “sink to the lowest depths imaginable”. This tallies with what we’ve heard so far of the Ringed City lying deep within the earth.

The good news is there’s a bonfire right at the edge of the cliff, so it’s one of the shortest boss runs I can remember in the series. After the drop the player is attacked by the boss we’ve seen in the trailers, the one which resembles the old bat-wing demons. Turns out he’s called the Crimson Bat, and he doesn’t look too bad, at first; the player does a good job dodging some fumbling claw attacks and a breath attack with a long wind-up. At roughly half health, the Crimson Bat is joined by a friend called the Demon from Below, who harrasses the player from range with dark magic.

Unfortunately, killing the Crimson Bat triggers the second phase of the fight, in which the Demon from Below gets supercharged – much like the surviving partner in a certain deadly duo from Dark Souls – and returns as the Demon Prince. The player doesn’t last long after that.

Dark Souls III: The Ringed City is due to release on March 28. If you missed the announcement, read all about it here – it sounds like it’ll settle some of the biggest lore questions in the series.