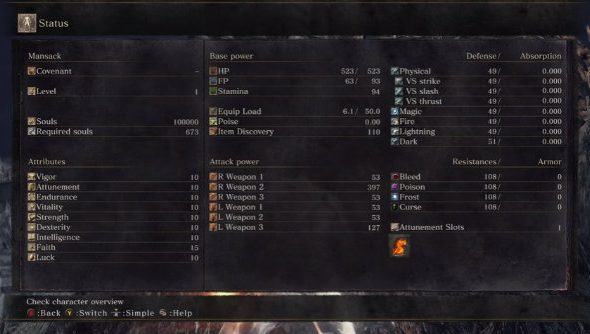 There’s a good chance you recently played, and maybe even completed, Dark Souls 3. You probably felt quite good about it if you finished, didn’t you? You finally got gud. But you didn’t, really – because you’ll never be as good as this guy.

In the mood for more swordplay? There’s a fair bit in our list of PC’s best RPGs.

YouTuberTolomeoRhas finished Dark Souls 3 without ever leveling up his character. You’ve probably heard of Onebro runs before, as they’re called, but this guy has taken it one step further.

Not only does TolomeoR not level up during his run, he also doesn’t block, or parry, or even roll out of danger. No, he just runs through attacks, sprinting, jogging and slashing his way to victory.

The intimate knowledge of each boss attack required for such a run really boggles the mind. I can only assume this took an ungodly amount of training and preparation to pull off – or maybe he’s just that good.

He does have another series on his channel where he takes on PS4’s Bloodborne in New Game+6, again not using dashes or rolls. The full Dark Souls 3 boss playlist is well worth a watch, but obviously be wary of spoilers.

As a taster, I’ve embedded a video below of him taking on Dark Souls 3’s first boss with these self-imposed handicaps… on New Game+7. Yes.