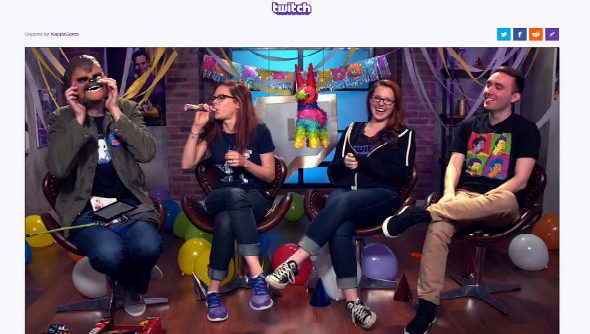 Twitch are introducing a new ‘clips’ functionality to the streaming service, allowing viewers to click a button and immediately share a snippet of a stream with whoever they wish.

I wonder if any of the titles in our upcoming PC games list will end up being popular on Twitch.

Whether you’ve seen an unbelievable display of skill, stupidity or you’ve generally just seen something worthy of a share while watching a Twitch stream, the new clips system will allow you to grab it and splash it all over social media.

Clips are being rolled out now across Twitch to a small portion of the audience of some of the most popular streamers, but it will be launched site-wide in the coming weeks.

Hitting the clips button grabs 25 seconds of footage from the moment before you press it and around five seconds after, giving you a 30 second clip to share.

You’ll be given a simple link to fire out, and your Twitch handle will be displayed on the video, giving you the credit if it goes viral.

Additionally, anyone who click the video can easily join a current livestream or subscribe to the channel if the stream’s over. It sounds like a clever addition. Check out the FAQ for more details.