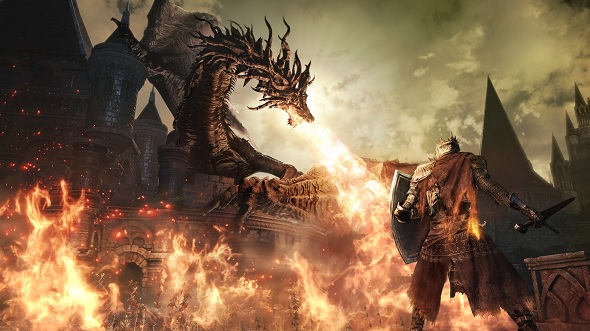 Update, January 11: Bandai Namco has confirmed that the Dark Souls Trilogy is coming to Europe.

The Dark Souls Trilogy is finally coming to Europe. The collection, which features versions of all three Dark Souls games, never came to Europe, despite releasing in several other major territories.

This information first came via two Amazon listings. Amazon Germany and Amazon Spain both list edconsole versions of the anthology earlier, although no mention of a PC release has been made yet. A tweet from Bandai Namco, posted earlier today, confirmed that the trilogy will release on March 1, but only references Xbox One and PS4.

The Amazon listings state that the collection will include Dark Souls Remastered, Dark Souls II: Scholar of the First Sin, and Dark Souls III: The Fire Fades, which comes with both of its DLCs. The trilogy was originally only released in Japan, but later came to North America and Asia. Until now, however, a European release has been mysteriously absent.

For the game to have come to Europe in the first place might not have been too surprising, but these arrivals do appear to have come out of nowhere.

One of the most iconic trilogies in gaming finally gathered into one bundle and coming to the EU! Dark Souls Trilogy Standard Edition, Available March 1, 2019. #DarkSoulsRemastered #DarkSouls2 #DarkSouls3 pic.twitter.com/DpVOKGBaIQ

Exactly what may have spurred Bandai Namco to release the trilogy now isn’t clear, but if nothing else, it offers an opportunity to experience (nearly) all of the Souls games again ahead of Sekiro: Shadows Die Twice.

Related: Sekiro is a FromSoft game, but with some major twists

We’ve reached out to Bandai Namco to check up on the existence of a PC version. We’ll update this article with any new information.