Are you familiar with Gun Game in Counter-Strike? It’s a mode in which you gain a new and usually more powerful weapon every time you get a kill. That mode has now got an equivalent in Dark Souls – obviously without the guns – due to the work of a modder.

All this talk of Gun Game got you hungry for shooting? Check our list of the best first-person shooters on PC.

The creator of the Gun Game mod for Dark Souls is Redditor bqm11. They say they were inspired by LobosJR (one of the best Dark Souls streamers out there) and his challenge runs to create a mod that the community would want to play today.

The mod, called DaS_GG, works by changing the levelling mechanic in Dark Souls so that you gain levels by successfully hitting enemies. However, you can just as easily lose levels by being hit or losing health from a fall.

“The higher your level, represented by your humanity in-game, the better random weapons and random armor you’ll get as well as increased stats, health, and stamina,” bqm11 explains on Reddit.

“For example, you start at level 1 wielding a very low tier weapon and no armor then after smacking an enemy 3 times you level up granting you a slightly better random weapon and you can continue to level up until you get hit or reach the cap. The level cap, amount of ‘heals’ you get, and damage level are upgraded by killing bosses (which bosses give what rewards is a secret though).” 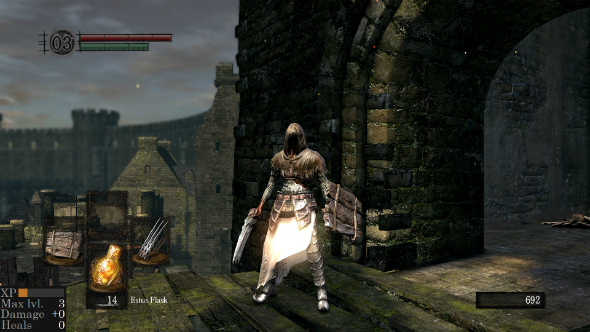 That last bit means certain weapons and abilities aren’t available until after you’ve defeated certain bosses. This prevents you from hanging around in the beginning areas, getting easy kills, and levelling up so that you’re completely overpowered. This is supposed to be a challenge, after all.

You can download DaS_GG, or the Gun Game mod, right here. If you have any problems getting it to run on your PC then you should check out the FAQin the Reddit thread.

If you fancy something a little different, Dark Souls now also has aBoss Rush mod, which lets you take on each of its bosses without a break in between.