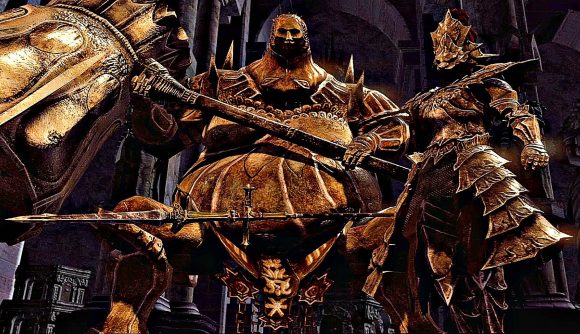 Why best one of Dark Souls’ myriad of hench bosses in hand-to-hand combat when you can just roll at them instead to accomplish your goal? Content creator Don’t Rach Quit managed to bring Dragon Slayer Ornstein and Executioner Smough down by just tumbling around, and it looks like a heck of a good time.

The streamer finally managed to complete the challenge earlier this week having been giving it a go for a while. During the fight, she explains that there’s a fair bit of strategy to it. She tends to take down Smough first as he has less defence and takes around 21 damage per hit. Ornstein, meanwhile, only takes 12 damage when you roll at him, but he can block you here and there. As she can take down Smough faster, it’s an easier route to narrow down the encounter to a one-on-one bout.

Aside from a deft set of reflexes, one of the significant challenges of this encounter is being patient enough to whittle down the health of each boss. Don’t Rach Quit’s successful encounter was around 40 minutes long, though she mentions it can be testing when you fail the challenge after getting close to completing it.

If you’re looking to try this challenge yourself – you mad man – you’ll need the Thorns armour set. You can get this by beating NPC black phantom invader Kirk in all three of his summoned locations. The armour set gives you the ability to damage foes by rolling at them.

If you fancy watching the whole fight yourself, it kicks off around the one-hour mark:

If you’re looking for more RPG games to roll around in while you wait for Elden Ring, you can follow that link.