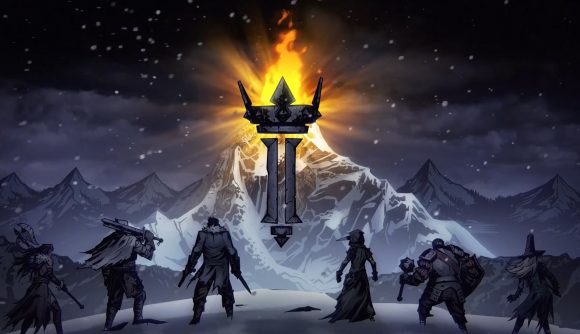 Red Hook Studios will follow up its hit horror strategy RPG with a full sequel – appropriately titled Darkest Dungeon II. The developers aren’t revealing many details about what to expect, but they have given us a chilly new teaser atop a snowy mountain, along with a warning to watch out for “The Howling End.”

The Narrator – apparently still voiced by Wayne June – tells us “In the howling darkness of the end, men will become monsters. But hope will ride with those courageous enough to carry the flame.” Then we see a torch atop a Roman numeral II, and a party of six adventurers preparing to take on an icy mountain.

“It’s no secret that we are big fans of the Early Access model,” the developers tell PC Gamer, “but we also are advocates for only doing Early Access if it makes sense for the specific game. Although there are some massive differences in structure between DD1 and DD2, the sequel is still very appropriate for an Early Access type approach.”

Beyond the news that the sequel will once again launch in Early Access, the interview is light on concrete details. The developers want to build on the mechanics of the original, while giving the sequel “its own creative and thematic identity,” though it’s certainly still playing in the realm of horror.

“Most significantly, however, we are working with a completely different metagame structure. Darkest Dungeon II is a game about enduring a gruelling journey, not cleaning up your backyard.”

Read more: Grind out the best RPGs on PC

The studio’s team has expanded from five on the first game to 14 now, and there are plans to bring the total up to 20 over the next year or so. With Darkest Dungeon II set to debut in Early Access, hopefully it won’t be long before we find out what’s coming.