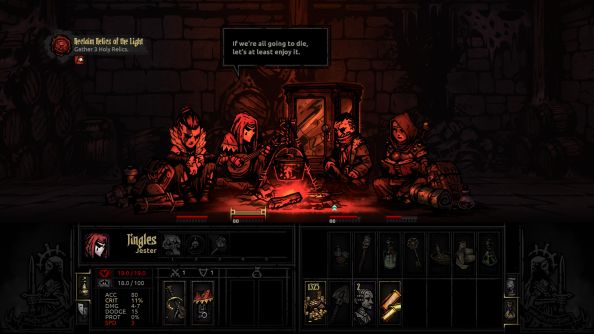 Darkest Dungeon, having come out of Early Access, isn’t showing it, with another massive patch landing this week. The latest, build 13843, is adding a whole new class focused around sacrificing damage to get better loot. It also brings a series of changes aimed at making the later stages of the game less of a grind, as well as a host of bug fixes and balance tweaks. Rather than deploying it straight to the stable build, Red Hook have decided to create an opt-in beta branch (named coming_in_hot, because of course) where they will test and tweak patches before pushing them to all players.

One of the best games of 2016, Darkest Dungeon, and it’s still getting better.

Here’s the highlights from the patch:

Read the full thing over in the Steam announcement post, which also confirms the Linux port is “practically ready” and will be released later in March. Their next big update will be delayed slightly by GDC next week, so they’re not positive on a timeline beyond that.

To get access to the patch, right click on Darkest Dungeon in your Steam library, hit Properties and go to the Betas tab. There you’ll see a dropdown, select coming_in_hot on there and confirm. You might need to restart Steam or wait a little bit, but it will start downloading. They do warn that “once you opt in you cannot go back to the older build” but, presumably, iteration on it will be quick if any serious bugs are found. They prefer this style of development as a continuation of the Early Access philosophy, while leaving a stable build for all players if folks who’ve bought a ‘finished’ game just want it to be available at all times.