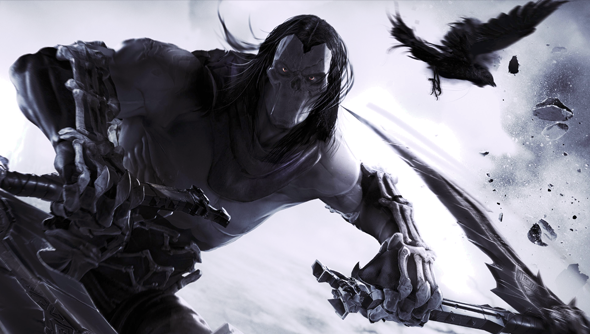 Amazon recently listed a remastered edition of Darksiders II, however shortly after it was was spotted they pulled it from the site. Since then Nordic, who bought the game from THQ when it had to auction of its game library, have confirmed they are working on a remastered release of Darksiders II.

“The authenticity of the listing is unquestionable,” a Nordic spokesperson told Gamespot, proving the money they used to buy ‘101 different ways of saying Yes’ had been well spent. The spokesperson wouldn’t say anything else as Nordic aren’t ready to discuss the project. However, they did send through a list of 14 other ways of answering in the affirmative.

Hopefully a remastered version would not only look better but include all the game’s DLCs and maybe even nice extras like director’s commentaries. Also an artbook would be a wonderful addition, Darksiders II was one of the best looking games 2012, after all.

Nordic made a name for itself back in 2013 when it spent $4.9 million buying old THQ properties, including Darksiders, Red Faction, Supreme Commander, and Destroy All Humans! Since then they’ve also bought the Desperados IP, which I sorely hope gets turned into a new game soon because it’s been too bloody long since the likes of the Desperados and Commandos games.

Back when Nordic acquired Darksiders the series’ director, Joe Maduriera, said that the franchise “is not dead” and Nordic seemed “committed” to keeping it alive. Nordic didn’t hire the team at Vigil at the time, though, Crytek USA took them on. Since then Crytek USA has closed its doors meaning if Nordic wanted to make a new Darksiders it may be possible to get the band back together. Nordic stated at the time they wanted the original team to be involved with any future sequels. This remastered release could be Nordic testing the waters for interest in a full-blown sequel.