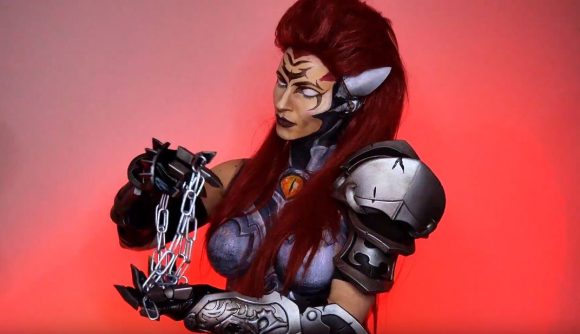 Darksiders III is coming out in a week, and to get people excited about taking on the Apocalyptic role of the whip-wielding Fury, THQ Nordic is inviting us all to… relax with some ASMR?

Yes, in fact, that’s exactly what they’ve done. The publisher has commissioned British bodypaint artist and cosplayer Ruby True to create a series of ASMR videos in which she dresses as Fury and plays with fire, all meant to stimulate an autonomic tingling sensation and even light euphoria.

If you’re unfamiliar with ASMR, it’s short for autonomous sensory meridian response, a sensation that’s supposedly triggered by soft, gentle vocalizations or whispers, or sometimes by repetitive soft sounds like fingers tapping on a surface.

There isn’t a lot of science behind ASMR yet, but it’s proven to be an explosively popular YouTube genre – which I suppose means it was only ever a matter of time before it was leveraged into videogames marketing. THQ Nordic’s partnership with Ruby True to create promotional Darksiders III ASMR videos is the first time I’ve seen it done, and it’s certainly something to behold.

Ruby True appears in full Fury cosplay, although apart from a couple pieces of shoulder armor and gauntlets, her outfit mostly consists of bodypaint. Don’t get me wrong, that’s cool, but just be aware of that if you’re about to start watching this on the bus or at work.


She’s also made a video that features a chain whip, Fury’s signature weapon in Darksiders III. For best results, you’re supposed to use headphones. Just remember, it’s meant to help you relax.