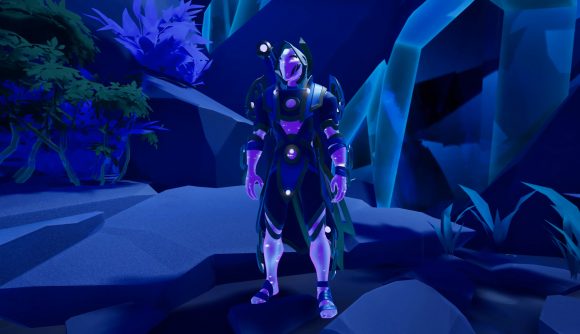 The next big update for Dauntless, Phoenix Labs’ free-to-play answer to Monster Hunter, launches June 11, and it’s taking slayers to a new, spooky area called the Umbral Deeps. It’s a place teeming with darkl aether energy, and inhabited by a slithery new Behemoth. A new teaser trailer provides a peek at both.

The expansion is called Call of the Void, and it’s a sizeable update to Dauntless. The new Umbral Deeps is a floating archipelago chained together with aetheric bonds, and it once was inhabited by people called ‘Void Runners.’ There’s a kind of spacey, extra dimensional feel to the place, and the seasonal transmogs that are coming with the Call of the Void expansion reflect that – masks that show a view of a starfield in another plane of existence, for example, and trees that glow with energy.

Call of the Void introduces a new activity called Umbral Escalations, a series of back-to-back Behemoth fights that culminates in a showdown with Thrax. Thrax is a worm-like monster with insectoid legs who attacks with umbral energy, and it’s a pretty tough customer – so you’ll want to gear up and train up.

Call of the Void is launching on June 11th.

Prepare to dive into the Umbral Deeps, a place of mystery and power.

Just watch your step, Slayer. The aether there has created all kinds of monstrosities. https://t.co/5OzlQN7kum

The latter will be easier to do thanks to the new Training Grounds area, where you can experiment with all the various weapon classes in the game and try out different character builds without a time limit or the threat of imminent death looming over your head. You’ll be able to wail on some training dummies, and Dauntless will provide some tips on how to use the game’s combo system – essential knowledge for taking on more challenging behemoths.

Once you’re ready to take on Umbral Escalations and Thrax, you’ll be fighting for new rewards. You stand to earn materials to craft Thrax’s legendary weapons and use its umbral special attack.

The expansion also includes some quality of life improvements, like client-authoritative dodging and a redesigned main menu, plus a heaping spoonful of new cosmetics to browse in the store.

Again, Dauntless’ Call of the Void expansion comes out June 11, so it might be time to start working on leveling up that gear.