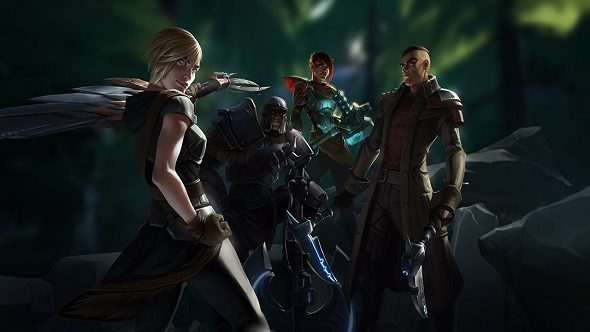 Monster hunting is a dangerous profession, so it’s helpful to have a fellow group of Slayers to support your endeavours. With co-op play being a core part of Phoenix Labs’ action RPG Dauntless, they have released a new developer blog post, describing the rough outline of the game’s guild system.

If you’re looking for fun with friends, these co-op PC games should do the trick.

Similar to guilds you’d find in most MMOs, Dauntless’ guilds have players coming together in groups to organize hunts out in the Shattered Isles. The more success your guild has out in the wild, the more perks you’ll unlock to use in battle. To activate these combat perks, you’ll need to cash in guild reputation which means you cannot coast on the achievements of your other guildmates if you want the best buffs in combat. As such, there is an incentive to not only work with your guild to unlock better perks, but to keep up your own growth up to use these combat boosts.

Starting up a guild is quite a costly affair, requiring a fistful of notes (the currency of the Shattered Islands) to purchase a guild charter. Once you’ve named your guild, you can start recruiting fellow Slayers to bolster your ranks. There will be customizable items to show off your guild affiliation but Phoenix Labs have kept quiet about what form these items may take. Guild tabards are a given, but charms to hang off the end of your weapon with your guild logo on it may be a cool addition.

With any popular online game nowadays, a healthy community of streamers is vital to a game’s success. In this way, Dauntless is planning to have special guild features for streamers to “connect directly with their fans in the Shattered Isles.” Phoenix Labs are currently working with Twitch and other livestreaming services to see how they can integrate these platforms into the guild system, so expect more details on these features in the future. If you are a streamer with a sizeable audience, Phoenix Labs does want to know what features you’d find helpful for connecting with fans, so get in touch to offer your feedback.

Dauntless is planned to have an open beta this autumn, so sign up on their website for your chance to be a part of it.