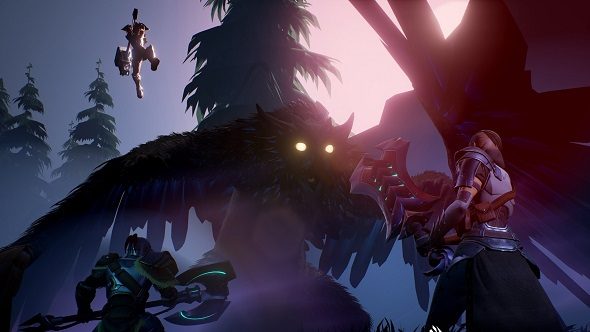 For someone on a budget, here is our list of the PC’s best free games.

With Dauntless being all about the cycle killing monsters to get loot to kill more monsters, effective material gathering is key to becoming a strong slayer. Along with cutting off pieces of behemoths to build pieces of armour or a new weapon, slayers must acquire a material called aether to smith new gear. Being born of it, behemoths will revert back to a state of pure aether upon death. Slayers must capture this magical essence via a special aether core in order for it to be used by the local aethersmith.

By taking these cores to Arkan Drew, Ramsgate’s oldest resident and master aethersmith, he can distill aether into a workable material called archonite. Archonite retains the elemental characteristics from the monster it was forged from, so archonite forged from a Pangar will be enchanted with frost. As such, items made with frost archonite may deal or resist ice damage. Archonite can also retain the deeper essence of a behemoth, inheriting their rage or cunning or savagery. Certain items may require both types of archonite, alongside specific bits that have been cut from a behemoth like fur pelts or pieces of horn.

As multiple reagents may be required to make a single item, slayers need to maximize material gain when heading out into the field. To aid their collection, players can buy Champion or Patron boosts from Dauntless’ in-game store which increases material drop rates upon felling a behemoth.

Champion boosts increase drop rates just for the player, while Patron boosts affect a whole part of slayers. These boosts stack on each other, so a whole group of slayers with Patron boosts will be rolling in aether and behemoth parts when they kill a monster. Patron boosts also gives behemoths a chance of dropping cosmetic items like dyes and flares. Cosmetic items are usually only earned from opening Chroma cores, but Patron boosts allows slayers to potentially find them in the field.

Boosts are only active for a limited time and Phoenix Labs will be balancing the price and effectiveness of these bonuses during Dauntless’ alpha and beta phases. Dauntless’ open beta will begin this autumn.