The head is an owl’s. There’s no question about that – the Shrike, one of Dauntless’ behemoths, has those unmistakable concave facial features as if carved into the trunk of a tree. The beak is short and sharp, and its eyes give off a steady yellow glow, seeming to reflect the light from an unseen car beam. In the trailer for Dauntless’s open beta, I’ve seen the Shrike cock its head in sudden jolts, the way birds do.

Here on the ground, though, the monster appears more mammalian, burly and bearlike. Partly that’s because me and a fellow Slayer have literally knocked the feathers off the poor creature. To begin with, the Shrike looked the way they draw dinosaurs now, covered in plumage. Now it’s covered in cuts instead. As it stomps about the map, shoulders heaving, I notice a deep gash on its right leg. It’s hard not to feel guilty as the beast weakens with each blow, switching to more pitiable animation routines. Maybe crafting a new Shrike Helm will make me feel better. Or a Shrikesaber.

Prefer to play something out of beta already? These are the best co-op games on PC.

This is the core loop of Dauntless, the monster-hunting game that is threatening to be absolutely massive on PC. You and three friends set out into the wilderness of the Shattered Isles – a floating, magic-infused archipelago in the sky – to locate a large beastie. Once found, you’ll dodge its advances and pull off melee combos to bring it down. And then you’ll upgrade your gear to do it again.

This is all done to protect the hub town of Ramsgate from a new and terrifying wave of behemoths – although, frankly, I don’t think the locals would want all the beasts gone, since the sale of monster-killing tools is the cornerstone of their economy. 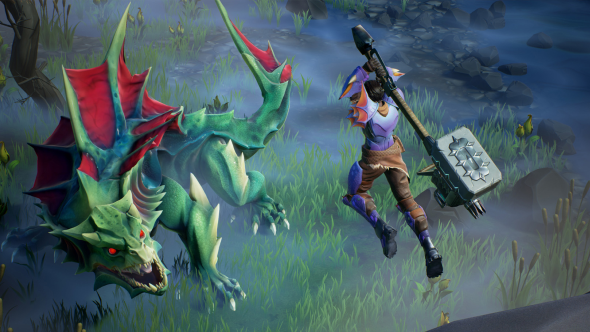 Dauntless developer Phoenix Labs told me that players have flocked to the game, not so much from the Monster Hunter community, but from those belonging to Warframe and Path of Exile. That’s not so surprising once you play. Dauntless is presented through the familiar lens of recent action games and RPGs, to the point where knowing its genre feels like a secondary concern for new players.

Take Ramsgate: a Last City only missing a planetary orb in its skybox. Conversations with quest-giving NPCs are framed exactly as they are in Destiny 2, and I mean that literally: with the character taking up the left hand side of the screen, and a brief description of your task and the prospective rewards on the other. It might sound trivial, but these are the elements that make playing Dauntless feel like slipping on an old, comfortable pair of blood-spattered shoes.

Even visually, with its prettily pared-back art style, Dauntless screams Modern Online Game in a way that makes it approachable and immediately understandable to those who haven’t wrestled with the quirks of the Japanese monster-hunting genre. Though make no mistake: it definitely belongs to that genre. 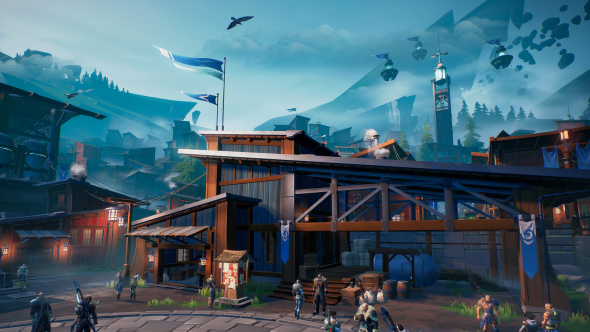 Combat is defined largely by the weapon you wield. Picking the Chain Blades means you’ve opted for mobility. If you’re far away from the monster, a tap of Q will close the distance in an instant; tap it again and you’ll disengage, kicking off from your foe as if it were the edge of a swimming pool.

Swap to the Hammer, as I did, and you’ll sacrifice speed for heavy blows – all the better to appreciate Dauntless’s weighty sound design. Less obviously, the hammer doubles as a shotgun, firing elemental slugs into the flank of a monster. The differences between the five weapon types are so far-reaching, in fact, that they effectively constitute Dauntless’s class system. Even the UI fundamentally changes in response to your choice – picking the hammer ornaments the screen with a bar that keeps track of your ammo and reloads.

These nuances are appreciated because, at least in the early part of the game, playing Dauntless is a simple business. The maps you’re dropped into to find your prey are empty, reducing the hunt to boring legwork. If you’ve played Fortnite’s Save the World mode, imagine the gathering phase, except the only items you can gather are flowers to sell for crafting currency back in Ramsgate. 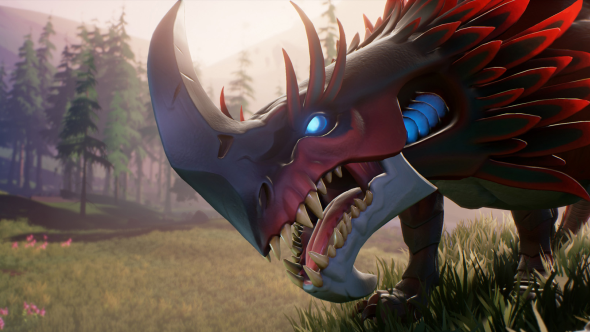 There’s scope for this part of the game to improve over the course of the beta and beyond through Phoenix Labs’ planned cadence of rapid updates. Certainly there are other signs that this is not a finished game, like the slow matchmaking and a recurring bug that left my comrade and I sitting on the map after the victory screen, when we should have been warming our feet back in Ramsgate.

Otherwise, it’s easy to forget that Dauntless isn’t finished because it’s getting played so much. New players are coming in droves, and the drip-feed of discovering the combat’s depth seems likely to keep them sated. That deep wound on the Shrike signified that the leg was broken, clueing me into the idea of part damage. Better Slayers than I already know to hack away at specific limbs to maximise the loot they get from their monsters.

What is it that hunters say? To honour the animal, you should use every part of it. Of course, there’s another argument that says, to really do right by the monsters, we’re probably better off leaving them alone. But that hammer won’t upgrade itself.