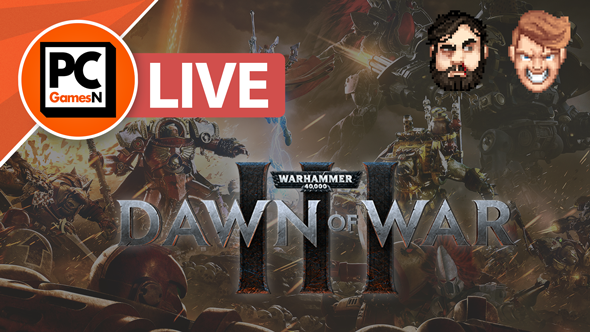 Dawn of War III comes out this week and we’re rather large fans. To show it off, we’re going to be playing it on-stream via YouTube and Facebook Live. Ben takes command of the far future forces of the Imperium, Eldar and Orks to see how far he can get on the hardest difficulty the game will allow.

For full judgement, check our Dawn of War III review.

Join us for these embarassing failures/total victories at 3pm BST / 4pm CEST / 10am ET / 7am PT – right now, in fact – and revel in the demise of millions. You can watch on YouTube at the embed above, or on Facebook here. We’ll be going for around an hour, or until Ben taps out. Whichever is funnier.

For more Dawn of War 3, here’s our units guide with total information on everything available in-game and our discoveries when it comes to how the game runs. If you’re just wondering what it is, here’s everything we know about Dawn of War III.

Do subscribe to our YouTube channel to be informed of when we’re doing livestreams – they’re going to be quite common – and let us know what you’d like to see us play in the comments below.