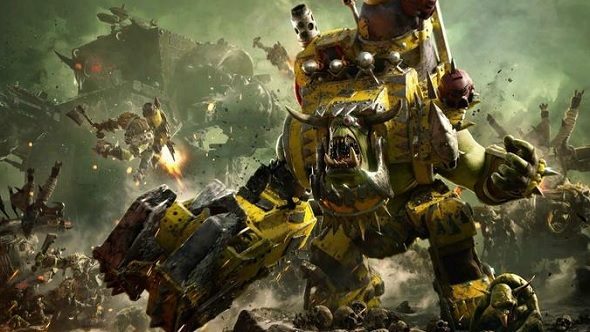 As part of IGN First, Relic Entertainment have unleashed the first bits of information about the Ork faction for Dawn of War 3. Expect lots of chanting, terrible spelling and gargantuan mechanical monstrosities if you choose to run with these angry green aliens.

If you are into large scale warfare, you may like these other PC strategy games.

Lead by the ruthless Gorgutz ‘Eadhunter, playing the Orkz in Dawn of War 3 requires a lot of micromanagement, as Orkz can quickly flood the battlefield, thanks to their fast squad creation. As Orks love to take pieces of scrap to graft onto their bodies to create “kustomz”, a major part of the Orkz playstyle is the collection of battlefield scrap to buff up existing squads or create new units. Scrap can be salvaged from the wreckage of vehicles and Super Units, with Orkz also being able to create Waaagh Towers to collect more precious scrap.

If you are smart with your scrap management, clever Ork players will be able to create a constantly moving frontline, bolstered by Waaagh Towers and a steady flow of scrap to “kustomize” your Ork horde. This means strapping bombs to squigs, firing whole Ork squads out of Trukks and building huge Morkanauts to smash through your opponent’s defensive line.

Make sure to check out the video above to see the Orkz in action, as they smash through Space Marines in robots made out of rusty skips and sawblades.