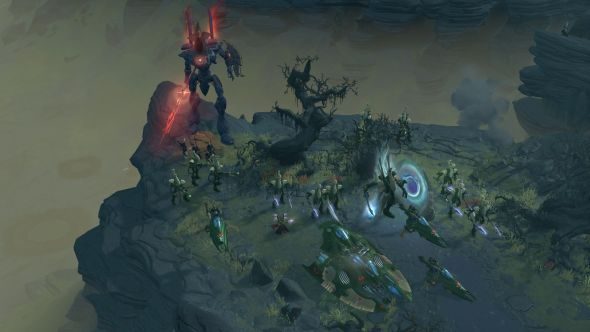 Turns out all it takes is a “pointy stikk” as the Orks put it to get an interspecies war up and going. The Space Marines, Eldar and Orks, Dawn of War 3’s three – yes, looks like we’re keeping it to three – factions are all gathered on an icy hellworld to grab the Spear of Khaine. Why? Greed, lust for power, it’s probably capable of blowing a planet up – you know how it is in the 41st millenium.

Want to know what you’ll be playing with? Here’s every Dawn of War 3 unit we know about.

The majority of this seems to be using the in-game engine, for both the regular strategy portions as well as more cinematic moments. Much of the concept art scattered between that is new too – is that how we’ll see the story told? We’d hoped for more of the style and quality of the beautiful, slightly haunting announcement trailer.

As for the Spear of Khaine, it’s a repurposed name, only having been used once before in 40k terminology to reference a group of soldiers rather than an artifact, back in the Eye of Terror codex from the early 00s. Khaine is the Eldar blood god, and the words of wisdom from Taldeer at the start of the trailer rather suggest he’s still all in on the war plan.

DOW3 has no more solid release date than 2017. With all three factions revealed and trailers like the above doing the rounds, it can’t be much longer now.