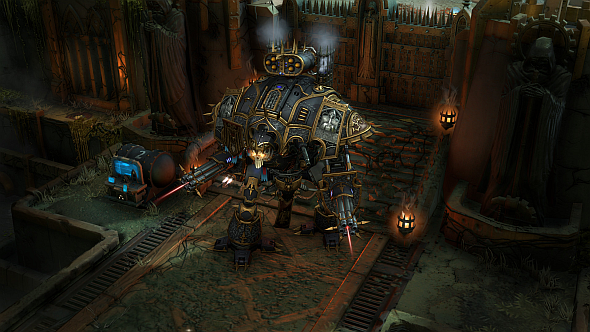 Dawn of War 3 is out in a little over two weeks, and to get you in the mood to pop some orkish skullz, developers Relic have released a new trailer based on the opening cinematic of the Imperial campaign.

Seeking more heretical knowledge? Here’s everything we know about Dawn of War 3. Watch out for Inquisitors.

The trailer opens with some portentous voiceover and Eldar runes embracing the Spear of Khaine, the maguffin that will drive the campaign. An ork horde is then depicted assaulting an Imperial fortress via the medium of some rather beautiful still images.

Unfortunately, the Imperial commander, an Inquisitor, withholds reinforcements, leaving the knights of House Varlock (a house of Imperial Knights native to the embattled planet, Cyprus) to resist the orks alone. Blood Ravens Chapter Master and series stalwart Gabriel Angelos is having none of that, and sends his marines in to straighten things out.

The trailer concludes: “The Inquisitor was not pleased”. The top-voted comment beneath the video succinctly describes what the Inquisitor can do.