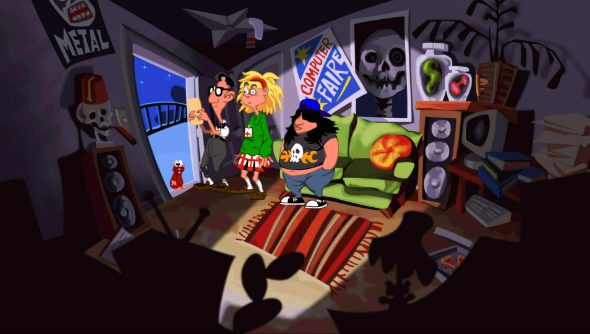 It’s important to be reminded of the classics from time to time. Sometimes it’s from our own sense of nostalgia, other times developers and publishers do it for us. Take today’s release of Day Of The Tentacle Remastered as an example, a game many of us will fondly recall from our younger – and go on, better – years.

To celebrate the release of one of the finest and most recognisable adventure games ever made, we spoke with one of the key developers on the original release about the game’s creation.

Dave Grossman was, alongside Tim Schafer, a lead designer and writer on Day Of The Tentacle, taking over the reins from Ron Gilbert after the release of Monkey Island 2: LeChuck’s Revenge. Given the opportunity to speak with such a central figure in the game’s development, we simply had to find out how a classic was made.

PCGN: What was the initial process of the game’s development like? Why decide to return to Maniac Mansion?

Dave Grossman: Well that was actually something that Tim and I wanted to do but partly it was a suggestion from management, in this case Kelly Flock who was running the games division at the time. This was on the heels of Monkey Island 2 where Tim and I had been working with Ron Gilbert and we were kind of being apprenticed to lead a game. So now it was time for us to go off and do a project of our own, and they thought that they would leave us stuck together. 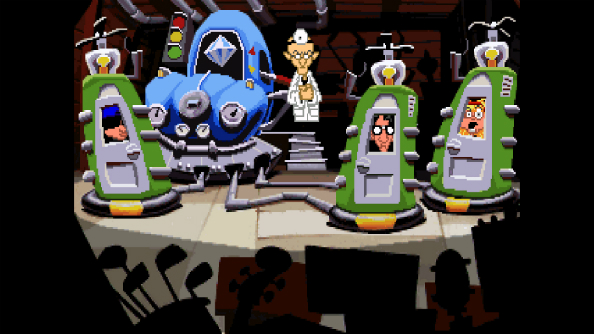 It seemed like a good idea, to minimise the risk that we would each go crazy in our own way – we could at least go crazy together. I think it was just them trying to be a little bit safe about what to do, so they said ‘we’ve got this Maniac Mansion thing and there’s some interest in doing a sequel, how would you guys like to do that?’. We were both like ‘that sounds good’. We probably would have done about anything, but that sounded really attractive to us because we had played it and we loved the characters and the world and the whole thing.

So the core aspect of the game was this classic, cartoon feel – how did you come to settle on that original ideal?

I think that may have initially been Peter Chan’s fault, because we were talking about visual styles for it and he was really into that. He was ‘oh, let’s do minimalist backgrounds and these squashy, stretchy characters and giant heads because we can make them bigger on screen now’. And we thought, ‘oh yeah, that sounds great, we love all that stuff’. And it snowballed from there, that started to inform our thinking about the kinds of things that you would do during the game and it actually fit very well with our kind of humorous puzzle design style. But you can see the constant homage going on in the puzzle design where you literally take moments out of those old cartoons… so you’re painting the stripe on the cat to turn it into a skunk and just the kind of logic that you used to complete the task in that game is directly informed by those old cartoons. You have to think like one of the characters in them if you’re going to succeed at all. 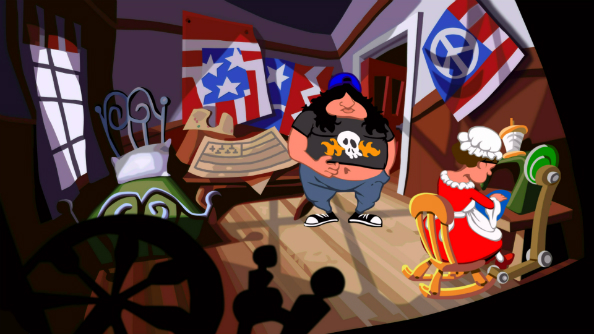 Did you find that, as a concept, it was easy to persuade the player to play in that way?

It seems to have worked. You don’t always know what is happening with the audience once you publish the game. You hear stuff back from people ‘oh I liked that game’, but you don’t really know what they did. Our one window into that was this thing that we called the ‘pizza orgy’, which was when we had the game into a sort of alpha-plus state where you could actually play it all the way through and there was enough information on screen that you could tell what was going on. We would get everybody’s friends and family in one evening and we would give them pizza and beer and sit them down in front of the game and we’d just watch them, just watch what they did. It seemed to work, they seemed to get it. They seemed to turn into cartoon characters right before our eyes, and that was pretty pleasing.

Was the inclusion of voice acting an especially important feature?

It was but we hadn’t planned on that from the beginning. It was originally going to be just your standard silent movie, if you will. We were about nine months in and I think we slightly behind schedule – although I can’t remember why, we stuck to schedule pretty well – and meanwhile CD ROM drives were selling like hot cakes and the sort of statistical install base machine that was in people’s houses all of a sudden could support this voice audio. A lot of people could. Kelly Flock came in and said ‘here’s a suggestion, why don’t we make this our first voice acted product and we’ll give you guys another six months so you can finish it’. And that was all education, because we didn’t have a voice department yet – we were just starting one with a couple of people – and we had to do voice casting, which we hadn’t done before. That was really fun, by the way. 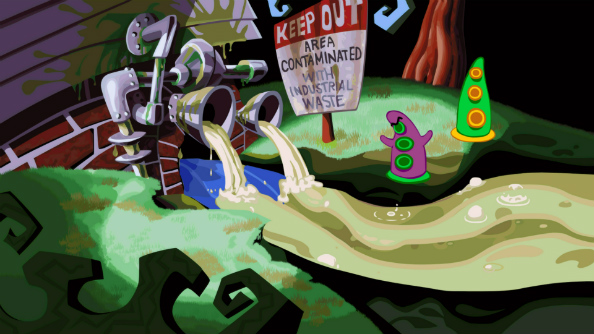 Obviously you were focusing on creating a humorous game… is it hard to make something funny?

No, humour comes easy to me and to Tim. I run up against that a lot, people say ‘oh comedy is so hard compared to drama’, but for me it was always the other way around. I think what it is is that comedy is very forgiving. If you have a moment that doesn’t land there’s another one that comes along a minute later and it’s hard to screw the whole thing up by screwing up one small piece. And the same is not true for drama because it builds on itself so heavily that you have to be a lot more careful about not missing a beat I think. But fortunately other people feel the opposite way and drama comes more naturally to them, and so we get both – and that’s nice.

You had this time travelling scenario, do you think that helped with the flexibility with how you created the different puzzles and humour alongside them?

Well, yes and no. That was actually a constraint, right, because you need to do x amount of your puzzles based on the time travelling mechanic, so you had to really mine that particular shaft for all that it was worth. You know, what are all the things that we can do that use time and let’s try and fit them all together? Thank goodness we were young and we could keep all that stuff in our heads, all twisty turns and paths and thinking ‘oh if this happens in the past then that means X in the present’ and so on. There were a lot of details to be managed and it’s complicated to do that with time travel. 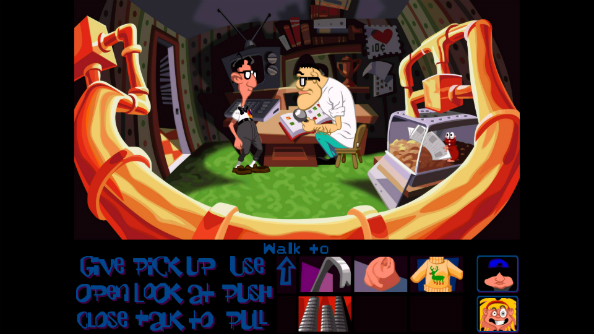 Are you glad that you went down that route in the end?

Oh absolutely, yeah. I still think that’s one of my best pieces of work ever. It’s certainly a lot of fun to do, and has been a lot of fun for people to play – or so I gather..

This was around the height of LucasArts success, especially with the adventure game genre. What was the atmosphere like working at the company at the time?

It was good, very collegial. There was a lot of camaraderie. By that time we had moved off of Skywalker Ranch and into a regular office building but still it was a place where there was fun happening all the time. It felt like when you were going to work you were going to see people you liked and you were going to have some good ideas with them and just generally be making fun at the fun factory and that was really good. Just all the meetings I would get asthmatic from laughing too much, and that to me is the mark of a good job and a good working environment. So people always say ‘it’s about the people’, and that was true in this case.

Day of the Tentacle Remastered is out today. Best adventure game ever? We dare you to disagree in the comments.