Days of War is an online first-person shooter set in World War II. That in itself isn’t much of a differentiator – WWII is one of the best-documented periods of history, and one of the most popular as a videogame setting.

Days of War is also multiplayer-focused, made in Unreal Engine 4, and has spent most of the last three years in Steam Early Access. Again, there’s at least one other recent release that shares all of these features. But with its full release date now confirmed for January 30, what does set Days of War apart from the others in this most crowded of genres?

We’ve been talking to Driven Arts co-founder Lee Snodgrass about how Days of War stands out, as well as the dev team’s experience in Early Access, and why they opted to make Days of War in Unreal Engine.

While its time in Early Access hasn’t drawn the headlines in quite the same way as, oh I don’t know, Battalion 1944, it doesn’t sound like it’s been entirely peaceful. “Spending almost three years going back to the drawing board was not easy,” Snodgrass says. “We saw plenty of peer studios both come and go during that period alone.”

Early Access is great for sourcing player feedback and showing your community how you’re acting on it, but it has its drawbacks. “We learned we’d avoid Early Access if possible in the future. We are still big believers in testing and learning early, but we think doing so in a public and paid manner like Early Access is neither ideal for developers nor players in our genre. That being said we probably wouldn’t have gotten this far without it, and thanks again to everyone who’s been patiently waiting.”

We couldn't afford a race car, but with UE4, Tim Sweeney gave us the keys to his for free

We named the elephant in the room above: Battalion 1944 is another old-school, multiplayer-focused, Early Access shooter, set in WWII and made in Unreal. How is Days of War any different?

“We haven’t based our game around esports because that’s just not in our DNA,” Snodgrass says. “We’re closer to the average FPS fan on Steam, and that’s the kind of person we made Days of War for. Our game is meant to be fun when you’re just one guy on a team of 16 that isn’t even bothering to work together, just racking up kills and working on your skills however you see fit. Doesn’t mean you can’t play it competitively, but that is not our focus. We’re not gonna outdo Counter-Strike or Siege with our competitive offering, but we can offer a bit of respite for people who just want a lot of WWII action in a more laid-back setting.” 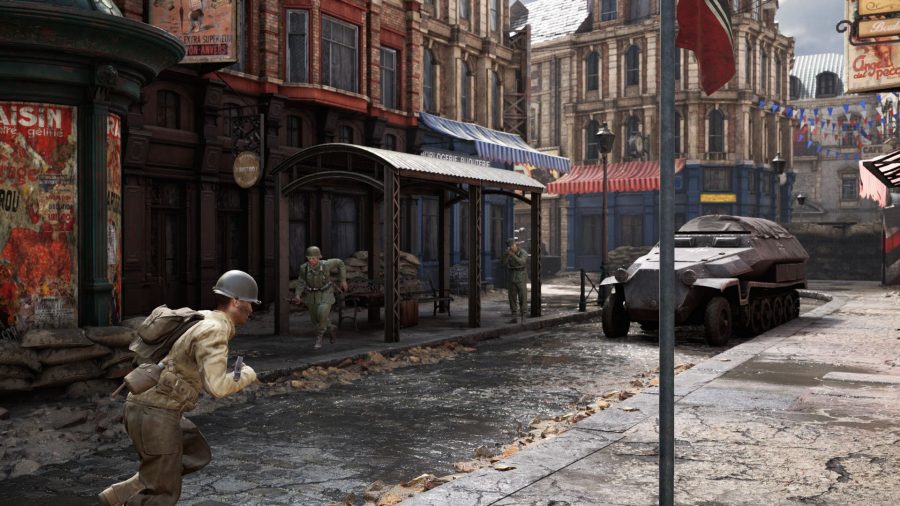 Days of War is also Driven Arts’ debut game, whereas Battalion developer Bulkhead has been around for longer. Days of War was the brainchild of “a couple of guys with no games industry experience that taught ourselves UE4 and went from a prototype to an early access release in eight months,” Snodgrass says. It was “an incredibly fast timeline only made possible by UE4.” How so?

“The short answer is because we didn’t think we could make a game like this in Unity,” Snodgrass tells us. “It’d be closer to the truth to say we made Days of War because of Unreal Engine. UE4 going free was the event that got us started making games. Before UE4 if you wanted to be a race car driver you needed the cash to afford a race car, or the pedigree to get someone to fund you. We had neither when we started, but with UE4 Tim Sweeney gave us the keys to his car for free, in return for a small share of any future winnings.”

While the Early Access build of Days of War was made in eight months, by the time it launches at the end of January, it will have had another 36 in development. Snodgrass describes that as “the hard part” – the three years of polish and iteration needed to deliver on the original vision – but it’ll be worth it, he says. “The release version of Days of War looks a lot better, it runs a lot better, the maps are better designed, and it now has plenty of content – at least that’s what our survey data is telling us.” 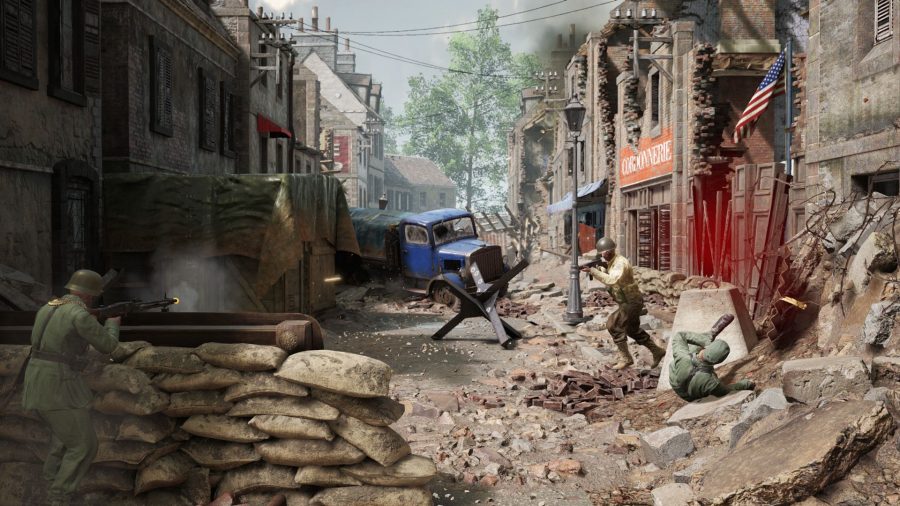 Interestingly – considering this is the engine that powered the iconic Unreal games and any number of other online shooters – Snodgrass says “our biggest technical challenge was scaling up the number of players and keeping the game silky smooth. We put 32 guys in tight quarters respawning every 10 seconds, which Unreal Engine didn’t do well out of the box.”

We won't outdo CS:GO or Siege in our competitive offering, but we offer more laid-back WWII action

That would’ve been a lot of players back in the days when Unreal and Doom were the biggest names in online multiplayer, but of course it’s nothing to a battle royale. And indeed, Snodgrass says “it’s improved a lot in the era of Fortnite, but in some ways still lags behind old tech like the Source engine in this area.”

Snodgrass says the relationship between Fortnite and the latest iteration of Unreal Engine has been “more like a horse pulling a chariot” than “an engine powering a car. We know this better than most because we actually released our UE4 game to the public back in Jan 2017. The underlying technology has made leaps and bounds since then… Unreal is a true next-generation piece of tech: a ground-up rewrite and not just a sequential evolution.” 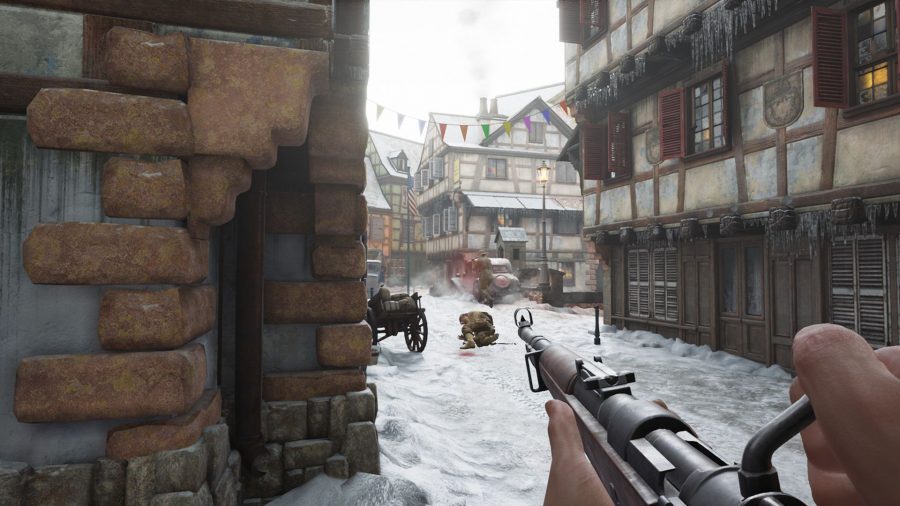 Other than finding a way to include 32 players in an online space, the biggest design challenge for the team was their lighting model which fit both aesthetics and gameplay. “It’s fairly easy to make something that looks beautiful in UE4, especially in a static scene or a demo video. It’s a bit harder to make something that looks good and works in-game, especially when that game is a competitive online shooter.”

Fortunately, Unreal Engine is developing in ways beyond supporting more players. “We’ve iterated countless times with our entire visual style, made possible by UE4’s robust lighting system and post-process capabilities,” Snodgrass says. “The fact that this can be done independently of the art has let us reinvent the look of the game several times over the past couple years. At the rate Epic is introducing new lighting features, we’ll probably want to do another lighting revamp in 2020.”

Snodgrass wanted to single out two other aspects of UE4: its mod support, which the team at Driven Arts is excited to see the community get stuck into, and UMG (Unreal Motion Graphics), a feature which helps with the creation of UI elements.

“Part of our redesign was ripping out our old UI and rebuilding it to feel more snappy and responsive. Coming from mobile app development we absolutely love UMG (Unreal Motion Graphics), which builds on top of Blueprints to offer a solution to developing UI for games. We find ourselves to be more expressive in making user interfaces for our game using UMG than we ever were on iOS or Android using Xcode or Android Studio. Hats off to Epic Games and Nick Darnell for this!” 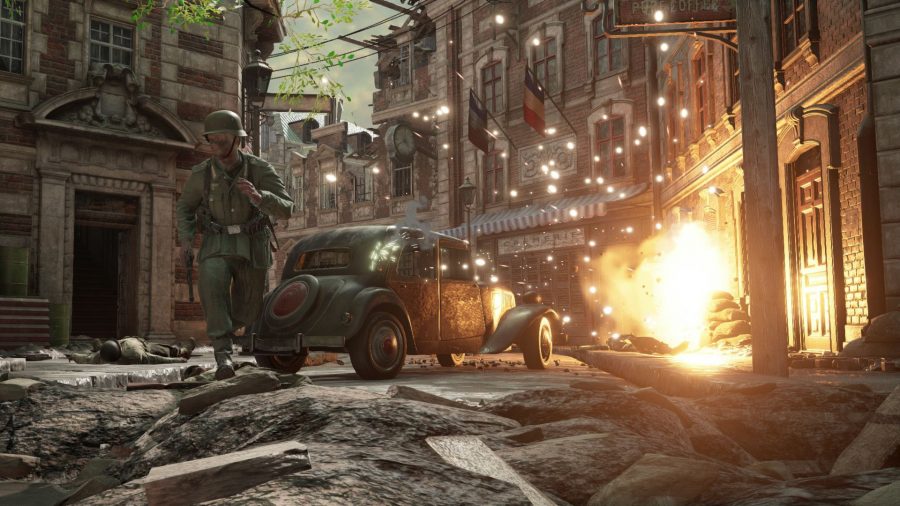 Days of War is due for a full release on January 30. At launch, it will have 12 maps set in locations around the world, a map editor, Steam Workshop support, 60 different weapons, and 32-player shooter combat with an old-school feel – and nothing too competitive or team-oriented, unlike others in this genre. If you played the game early in its Early Access period, you’re likely to see a number of improvements.

Days of War is on Steam Early Access here, with its full release scheduled for January 30. Unreal Engine 4 development is now free.

In this sponsored series, we’re looking at how game developers are taking advantage of Unreal Engine 4 to create a new generation of PC games. With thanks to Epic Games and Driven Arts.