Standalone DayZ’s latest update has been pretty well received so far, bringing persistence back to the backstabbing, murderous online world. We spoke to the game’s lead producer Brian Hicks about the update’s main aims, how he hopes they affect player experience and working towards leaving Early Access.

“A big goal was addressing the issues with item cleanup and respawn so we could turn the server side persistence back on,” said Hicks. “For the users, this meant a huge change to how the game played – what was dropped on the ground stayed on the ground until the system cleaned it up. Server restarts no longer meant an unexpected loss of user progress.”

In addition, the game’s economy was altered in the 0.58 update, changing what items spawned and tweaking their drop rate and location. “Add to this longer server uptime – 12 hours from the previous four – the first iteration of required vehicle components – glow plugs, battery, fuel, tyres – increased server side performance, the first viable build for base building, and the slaying of some long running bugs,” Hicks continued. “All these put together and you have a much more ‘DayZ’ style experience.” 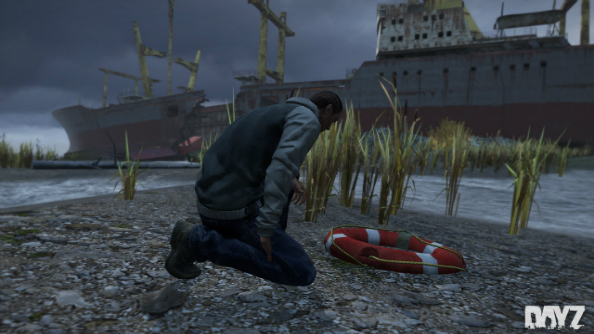 Hicks says he’s excited about the update’s reception, but won’t let that “post-update hype” cloud his vision of the bigger picture. “We still have huge areas of the title that need to be completed, tested, bug fixed, regressed, and so on. That said – 0.58 definitely has me excited for the next six months plus.”
He stresses that, even if you are enjoying the new features in 0.58, it’s important not to look at it as a patch. “This is just the latest build push to Steam during the development of DayZ. One step at a time, slowly moving towards leaving Early Access.
“We’ve still got plenty of placeholder systems out there, keeping the experience testable while the engine that powers DayZ – Enfusion – is being developed. If you’re interested in participating in the development of DayZ, get active: use the feedback tracker, read the status reports and participate in our official forums.”
Have you been playing DayZ since the update? Did you get murdered by some arse before you even noticed the changes? Let us know how you feel about the tweaks in the comments.