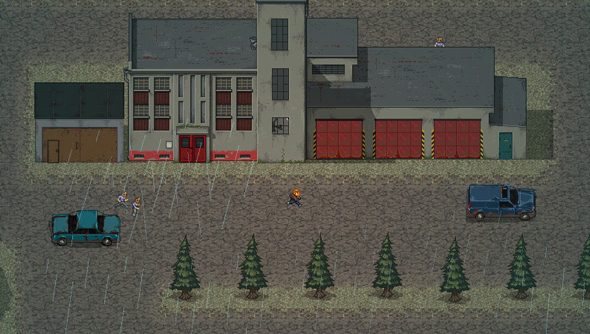 Whether at Legoland or in Minicraft, human beings can’t help but delight in seeing familiar sights miniaturised. Bohemia, for instance, enjoyed seeing the screen-swallowing first-person experience of DayZ reduced to a tiny, top-down ‘80s throwback – so they’ve released fan-made solo project MiniDayZ officially on their store.

MiniDayZ is a 2D single player game put together by a Russian fan who goes by the name CannedBits. It comes replete with hunger and thirst, lootable houses, fog and diseases – and naturellement, the dead.

Mr Bits has been posting development updates on Tumblr for the last seven months, and DayZ developers Bohemia have now rewarded his efforts with official recognition. You can start playing by registering a Bohemia account, whereupon you’ll be redirected to the studio’s store to pick up a free ‘copy’ of the HTML5 game.

“Search for the food and supplies needed to stay alive, keep clear of the ever-lurking zombies, and always be vigilant of the other desperate survivors,” advise Bohemia. “This is your story, this is MINIDAYZ.”

As always, it begins on the beach. But the charm of this version of survival in Chernarus is that it’s a simpler affair – about making a beeline towards any settlements that happen to pop up on screen, and away from any attendant zombies. You’ll want to adjust your expectations – clearly, MiniDayZ can’t offer the same, surprising behavioural quirks that DayZ proper can as an MMO.

The release has underwhelmed a portion of the DayZ community on Reddit, who’d been told to expect a reveal ahead of time yesterday. And CannedBits seemed disappointed with the initial response.

“I see mostly overhyped rage here,” posted the creator on the DayZ subreddit. “Its really sad, that people get mad from free stuff. Yes, we have a looping problem in store now, but its on the way to fix. I hope after fix some of you really enjoy the game. And haters… gonna hate.”

A little earlier, however, DayZ originator and figurehead Dean Hall had thrown his weight behind the project.

“I have to say, I absolutely love miniDayZ,” he gushed. “I think it’s awesome, amazing, addictive, and brings something really new to the experience. I’m so glad you’ve been able to make it even better! Ignore the haters, the vast majority of people think it’s fantastic and I am one of those people.”

Have a quick wasd over lunch and let us know what you think in the comments, yeah?

Have you heard? You can now eat people in DayZ. But it’s not advisable.