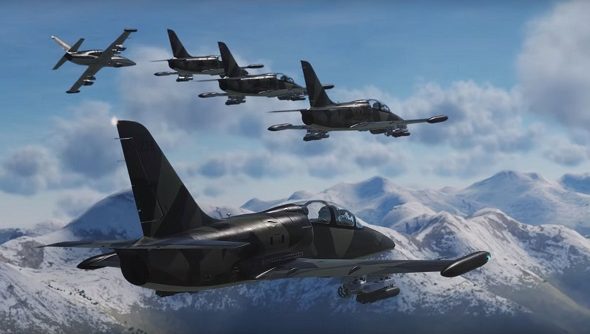 You don’t see flight simulators coming out the way they used to anymore. Of course, they haven’t completely disappeared – but they tend more toward platforms like Eagle Dynamics DCS World, which is ‘free to play’ and has more than $1,500 worth of DLC planes and campaigns to buy. Now, Eagle Dynamics has announced a new module for DCS world coming this fall, Modern Air Combat. And boy oh boy, it sure is pretty.

The in-game trailer shows off the roster of 14 aircraft that the Modern Air Combat package will bring with it, including some of most notable fighter jets from the Korean and Vietnam Wars. Of particular note is the F-86F Sabre, the U.S. jet that cut a distinctive profile in the skies over the Korean peninsula.

Here’s our list of the best simulator games for the PC.

There’s also the Russian Su-27 Flanker B heavy fighter, along with a couple variants – the carrier-capable Su-33 Flanker D and the Chinese version, the Flanker B+. The pack also will include the F-5E Tiger II and Russia’s MiG-21bis Fishbed, which figured heavily into the Cold War dominance struggle between the US and USSR.

You have to admit, Eagle Dynamics knows how to cut a trailer. This one shows off all the included aircraft, and if you stay through to the end you’ll get to hear the unmistakeable Brrrrrrrrrrrrrrrt of the A-10A Warthog’s 30mm Avenger autocannon.

Eagle Dynamics hasn’t revealed pricing information on the package, but Modern Air Combat will be available sometime this fall. You’ll be able to fly any of the included planes over the Caucasus Mountains, Nevada, and the Persian Gulf, and Eagle Dynamics says it works great in VR.

It’s worth mentioning that this isn’t the more approachable, arcade style air combat that you see in something like War Thunder – DCS World is a hardcore sim, so it’s aimed at players who probably have already bolted a HOTAS setup to their gaming desk. All the same, Eagle Dynamics says it’s all playable with a mouse and keyboard.

Generally speaking, Eagle Dynamics have sold new aircraft modules separately, and they can be pretty expensive. Hopefully, the Modern Air Combat package will offer a healthy selection a bit more affordably per aircraft.