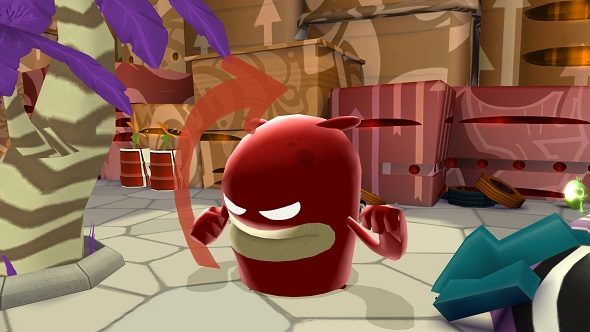 THQ Nordic have recently announced that they are bringing the colourful Wii platformer de Blob to Steam on April 27. For anyone who did not have the chance to play as a hyperactive blob of paint, pinging its way around a monochrome city, now’s your time.

For more open world fun, check out these other great PC sandbox games.

Developed by Blue Tongue Entertainment and released back in 2008, de Blob tasks players with taking down the evil I.N.K.T Corporation and restoring colour to Chroma City. This involves splattering paint across the city and inciting the citizens of Chroma City to throw off the shackles of the oppressive Comrade Black. Partnering up with the ‘Color Revolutionaries’, you will jump, shoot and splatter different colours all over I.N.K.T property to help give hope to Chroma City’s citizens. This eventually results in your colourful mob launching an attack on the I.N.K.T fortress and washing away the monochromatic regime. Wow, de Blob sounds a lot more political now that I think about it.

Besides the single player campaign, de Blob comes with eight multiplayer modes for up to four players. Most of these involving competing with players to paint as many buildings as possible in your own colour, while stopping your opponents from doing the same. Blob on the Run gives one person the ability to paint, with the other three players trying to steal that power while Paint Race has it that buildings can only be painted once, making it a race to cover as much ground within the time limit.

The multiplayer is a local affair, so don’t expect to be racing against international blobs to paint the city your colour. The PC version does seem to be a straightforward port of the Wii game, with the textures upscaled to a higher resolution.

If you are attending PAX East in Boston next weekend, you will be able to get your hands on with de Blob but for everyone else, get your brush and palette ready for April 27.