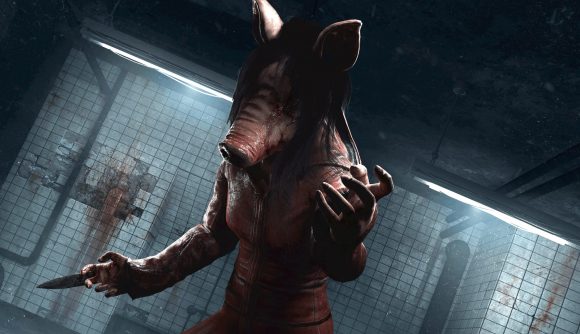 It’s already one of the best horror games on PC, but now it looks like Dead By Daylight could be getting its hooks into another genre too: the dating sim. According to a new trademark, developer Behaviour Interactive is working on a love sim spin-off called Hooked On You. Yes, really.

Apart from being one of the best multiplayer games around, Dead By Daylight is almost as well known as Fortnite for its great crossovers – such as Resident Evil or, more recently, Sadako from The Ring. However, we’re not sure anyone expected Dead By Daylight to crossover into another genre entirely. Certainly not a dating sim, anyway, and not after Valentine’s Day.

As spotted by TechRaptor, Behaviour has recently filed a trademark for a game with the non-ambiguous title of Hooked On You: A Dead By Daylight Dating Sim. To see for yourself, head here and search for the title under “Basic Word Mark Search (New User)”. It was filed on February 16, 2022, and seems to be for an actual game.

It seems highly unlikely that Behaviour would go through the copyrighting process for a joke, so we could see something for April Fool’s Day, so this could be a full release. We’ve seen several unusual dating sims in the past, like a KFC one with a hot Colonel Sanders. Just this month saw the release of DreadXP’s Sucker For Love, a more horror-focused dating sim, so Hooked On You could be in the same style.

Nevertheless, the trademark was only filed this month, so it may be a while before anything comes of it. However, if it’s announced on April 1 we won’t be at all surprised.