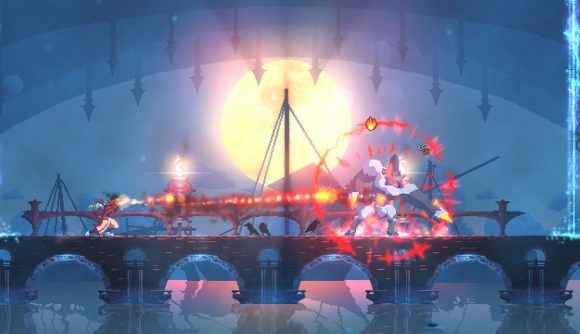 Last week, Dead Cells developer Motion Twin rolled out an alpha build for the roguelike’s next update, which introduces a brand-new optional biome called The Bank. After some testing, Update 28’s been given a good going over for a new beta that’s now ready to try out.

“The Bank has had a little polish, so we’re here again with a new beta to check that we didn’t break anything on the way,” Motion Twin says in on Steam. “The changes for the beta are mainly balancing and bug fixing, but we’ve also added a load of SFX/music and lore room text, so the biome should feel closer to the real deal.” There’s no detail on the new lore text and SFX beyond some vague notes noting their addition, but it sounds like it’ll be a decent step up from the previous alpha version in these areas.

In the way of balance changes, the beta addresses a bunch of different facets of The Bank. One of the three new biome-specific mobs, Evil Guillain, gets some damage and reactivity buffs, and it can now spawn in Cliff after The Bank. Big Gold Gorger – the greedy mob that gobbles gold as it grows and can “kick your ass” if you let it hit its final form – gets a slight damage nerf, along with Mimic, too.

Elsewhere, the survival vampirism buff effect has now been doubled on heavy weapons, and there’s a war spear damage buff but it “is no longer a heavy weapon”. A handy fix for gold plating means that, while wearing it, you’ll now find the kill streak gets properly reset and it breaks flawlessness on bosses, but another notable change to the kit from the alpha version is that it no longer protects you from curses “(as planned)”.

Bug fixes patch up issues ranging from shark crits not displaying properly, to a Gold Digger crash that was occurring in the Clock Room. “Dagger of Profit had no cooldown after its attacks, making it glitch weirdly and launch attacks while the previous one was still resolving and breaking its balancing and FXs in the process,” the devs also add in the list of fixes.

You can catch the full patch notes for The Bank’s beta – as well as instructions on how to give it a whirl if you fancy it – on Steam at that link. There’s no word on when the official release will come along just yet, but hopefully we won’t have long to wait to dive into The Bank’s final version.