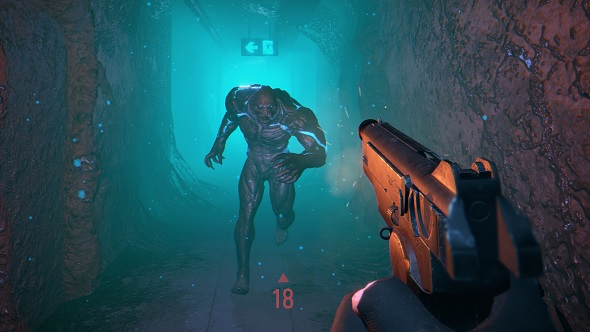 In need of a new multiplayer shooter? Dead Dozen is a little different from the rest in that it not only lets you shoot your friends but eat them too. We have ten Steam keys for it up for grabs below.

Like free games? Of course you do! Here are some of the best free PC games.

It is 1993 and there are a dozen people trapped inside a Soviet research base in Siberia. When you start playing a game of Dead Dozen this is your situation. Unfortunately, the cold is the least of your problems as there is a ghoul with large claws and an empty belly running around.

You are armed with plenty of guns, ammot, and your wits, so you should be able to survive for a little while alongside your buddies. You can even barricade yourself in rooms and try to make a stand there. But, eventually, someone is going to get caught out and killed. That is when the real fun in Dead Dozen begins…

Upon being killed, you turn into a ghoul yourself, rising up to kill your former allies. It means that, if you barricade yourself in a room to keep out a ghoul, but one of your team gets caught out and killed, you will then want to quickly bust out of that room to avoid being trapped in their with your enemy.

We have ten Steam keys for Dead Dozen that we are giving away. If you want one then you should enter the competition via the widget below.Every action you complete is worth one entry into the giveaway, and the more actions you complete the more chance you’ll have of winning. We’ll also need your email address so we can send you a code upon winning – we won’t send you spam, we promise. Please read ourterms and conditionsbefore you enter.