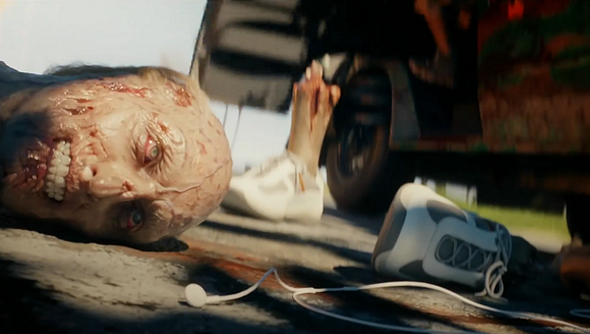 “I didn’t realise when I first played Journey that the other people turning up in the game were other players,” Dead Island’s game director, Bernd Diemer, told GameTrailers. “The elegance of that stuck with me. The first game was really good, you just pressed a button and someone would join you but we wanted to get rid of even that.

“Internally we call it the world’s smallest MMO.”

The first Dead Island gave you an island to explore, a toolkit full of odds and ends to modify your weapons with, and a skill tree to flesh out. While the story was naff and it all started to come apart at the seams by the final boss battle it was unique and a great deal of fun. Yager, who are taking the reins from Techland to develop the sequel, understand that.

“The moment I remember, the moment I will never forget, is when I came out of the resort for the first time after fighting zombies in the intro,” recalls Diemer. “The doors open and I saw this beautiful island and the swimming pool filled with blood. That’s what we want to keep, that holiday spirit, a beautiful place where you want to be because that’s what I think is the most outstanding thing from a tone point in this franchise against other zombie games.

“We decided very fast that it had to be California.”

Yager are build three huge areas for players to explore in Dead Island 2. They’re building a version of LA that stretches from the Hollywood Hills down to Venice Beach, and their recreation of San Francisco takes in the Golden Gate bridge and the surrounding Bay Area.

The size is why the player count’s been upped to eight from the last game’s four. As you’re exploring the world other players will seamlessly enter it. Just like in Journey.

“You can’t compete,” Diemer makes clear. “We didn’t want to make a competitive game where it’s about killing other players and racking up a kill count. That’s not Dead Island. It’s about having fun and playing with other people.”

That’s not to say it’s entirely cooperative. You still compete for resources. Diemer gives the example of a chopper flying over the area and dropping the “Golden Machete of Doom”. If you want it, you’ll have to race other players to the dropoff site.

I’m a fan of the first Dead Island game, despite its faults, and I’m a great admirer of Yager’s Spec Ops: The Line. The two combined have me excited for what they’ll release in Spring 2015.