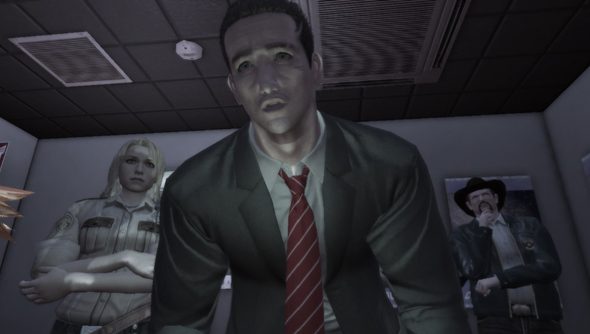 Deadly Premonition is a PC game now. It is quite good. The Director’s Cut has come straight from the PS3 and was considered batshit even there, where Heavy Rain was judged to be a coherent police procedural and not CSI pulled through Google Translate backwards and left by the railway tracks.

So it’s okay, but maybe also your future favourite game. One of those. And it just so happens that GOG have ten more copies than they can fit in the letterbox of their lovely website. Would you like one?

You’re going to need watch this first. Trees will bleed:

Right. The only sensible thing I can think to do now is ask you each to think of a PC game. Done that? Okay. Now, imagine what that PC game would taste like as a coffee and let us know in the comments below.

Here’s an example: Assassin’s Creed III has a nutty aroma, on account of its obsession with solar flares and Mass Effecty aliens, but succeeds in the cup thanks the assured tang of beans first ground six years ago. It’s possessed of a dry, historical flavour, a sepia hue, and has an increasingly bitter 30-hour aftertaste.

Your turn. We’ll pick the 10 best and send out the codes directly, so make sure you have an email address attached to your PCGN profile.

One last thing: isn’t it time you drank the coffee?

{"schema":{"page":{"content":{"headline":"Deadly Premonition is out on PC today, and we have ten copies from GOG to give out","type":"news","category":"deadly-premonition-the-directors-cut"},"user":{"loginstatus":false},"game":{"publisher":"Rising Star Games","genre":"Indie","title":"Deadly Premonition: The Director's Cut","genres":["Indie"]}}}}