If you’re struggling to take down Death Stranding’s Cliff boss then we’ve got some advice to guide you through all three theatres of war. Boss fights in Death Stranding aren’t especially tough, but they’re certainly confusing, so don’t feel too bad if you get stuck.

It’s worth noting that this guide does contain some hefty Death Stranding story spoilers, so avert your eyes if you’ve somehow arrived at this page by accident.

Throughout Death Stranding you’ll come into contact with Mads Mikkelsen’s character who becomes a recurring boss fight across three Death Stranding episodes. If you want to learn how to beat Cliff in World War 1, World War 2, and Vietnam you’ve come to the right place. We’ll show you how to stop the combat veteran and immobilise his evil skeleton soldiers across the three time zones. We’ll also show you how to navigate the swamps and trenches and keep your equipment in check.

The first time you meet Cliff you’ll be wandering outside of South Knot City and get sucked into a supercell. This time around you’ll be taken to a World War 1 battlefield where undead soldiers reign and tanks roll across the battlefield crushing structures.

Before you start out on the battlefield, consider the fact that the game has constantly been telling you to use stealth and never engage in combat so far. In these weird fever dreams the rules are flipped on their head. You actively have to use weapons that you find on the battlefield to survive. 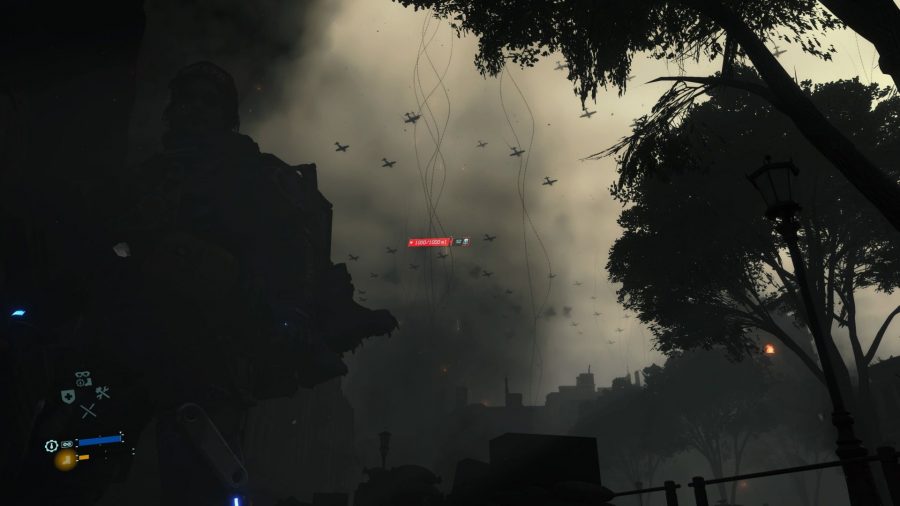 In this particular mission you’ll be introduced to firearms, but you won’t actually have to use them until you get to the boss battle itself. Mainly, watch out for the orange glow you see coming from some tanks before their arrival or you’ll get run over and check the floor for landmines where possible so you don’t get blown to smithereens. There are also turrets firing that you’ll have to look out for. Simply don’t get in the way of their line of fire and you’ll be fine.

Keep pressing on until you reach a trench and you’ll encounter Cliff for the first time. Death Stranding quickly becomes a corridor shooter here. The main things to note are the cryptobiotic trees hidden throughout the trench. These are essential if you get shot as you’ll bleed out if you don’t keep your health up at all times. Keep scanning the area with your Odradek to find more Blood Bags, shotguns, and rifles to up your arsenal.

When you find Cliff it can be quite alluring to simply follow him around the battlefield, but the best thing to do is to actually hop above the trench and follow the warning signs (the orange marks and signifiers) to figure out his new location. Just watch out for the mustard gas when you’re up there. There will be green clouds of smoke that appear and choke Sam out if you stand in one location for too long. Use the high ground to shoot down into the trench when you see Cliff for an easy advantage.

Cliff’s AI really isn’t that smart, and you can get alongside him out of his line of sight quite easily by strafing. When you’re faced with a group of his soldiers, just gun Cliff down as quickly as possible and ignore his army. Be warned that they’ll fade away but won’t quite stop shooting you, so when you see him disappear just run away and hide.

Naturally, the difficulty of the Cliff boss battles in Death Stranding scale as you progress through the game, so when you enter World War 2 get ready to change tact. This mission starts out in a different fashion to the first: you’ll lose BB and have to find Deadman to retrieve it.

At the start, you need to run through the battle as normal but watch for falling soldiers, MG placements, and bombs until you find Deadman in the sewers. There’ll be a slide you can slip down to get beneath the battlefield. From here all you have to do is trudge through the murky water then climb down the ladder to the next area. You should be able to hear BB crying which will guide you through the darkness.

Don’t forget to turn your Odradek light on to make sure you can see ahead of you, too. You’ll learn that this place is a special beach for soldiers who died in battle, hence why there’s so many skeletal soldiers.

This next section with the bell tower is where things get interesting. After the cutscene with Mads looking all moody, he’ll raise his strand soldiers from the goo and send them to hunt you down. This one is more like a game of cat and mouse than the first encounter where you could go in guns blazing without worry. 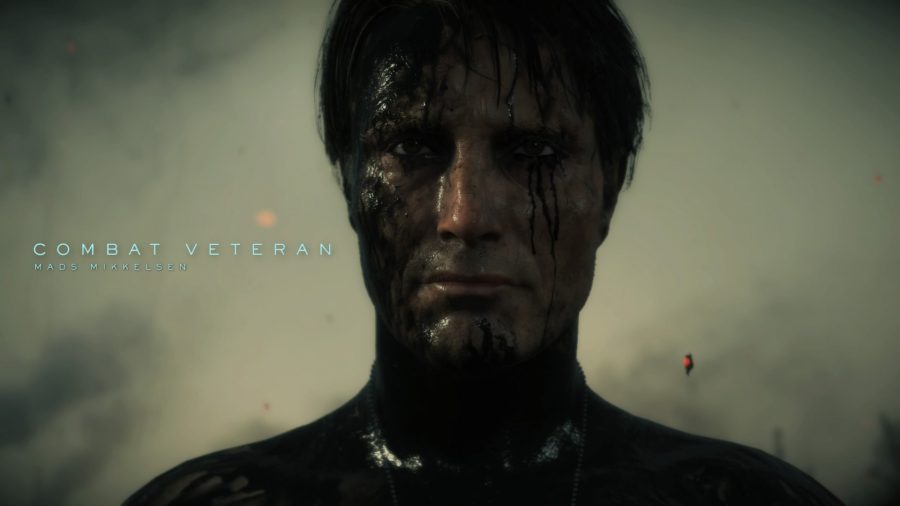 Of course you could try the wild approach if you wish, but if you want to get it done right the first time, stealth is the best option. Pull out your strand and lurk around the low walls, binding up the skeletons as you go. If an entire team of soldiers faces you at once they’ll quickly bleed you out, so be very careful. Once there’s only Mads and a few soldiers left, aim for the head and spray with an assault rifle to make short work of his team.

If you get caught in the bell tower, use the arches as cover and wait for Mads and his gang to clump up before chucking grenades at them. Some of the enemies have rocket launchers this time around, so constantly keep moving or you’ll be doomed before you know it. Remember to keep picking up and manually opening new blood bags as you go and be careful to drop the empty ones you’ve already used. Management of inventory is crucial in these modes, as if you play aggressive you’ll be draining blood bags

For the final boss battle with Cliff in Death Stranding you’ll get sucked inside another supercell storm with BB and land in front of a crashed helicopter. You’re in Vietnam, and the challenge is harder than ever. Given the improvements in military technology there’s a lot more to watch out for here. As well as the flickering soldiers there are now helicopters roaming the map with searchlights.

Constantly avoid their gaze so you don’t get rained upon with machine gun fire. Also, make sure that as you move you keep entering the small huts that line the way through the battlefield. You’ll find extra equipment and weaponry, but you can also sometimes use the huts as cover. Creep underneath and do your best Sekiro impression to get past some of the more chaotic parts of the map. Watch out for RPG fire and landmines too as you ascend to the next area, a jungle basin where Cliff is waiting with his gang of spooky soldiers.

To be totally honest, you’ll really struggle to surpass this area unless you try to do it fully in stealth. Much like in the previous chapter, equip your strand and use the greenery as cover. You’ll know you’ve ruined your chances when the screen turns an orange hue and Cliff says “Light it up.” 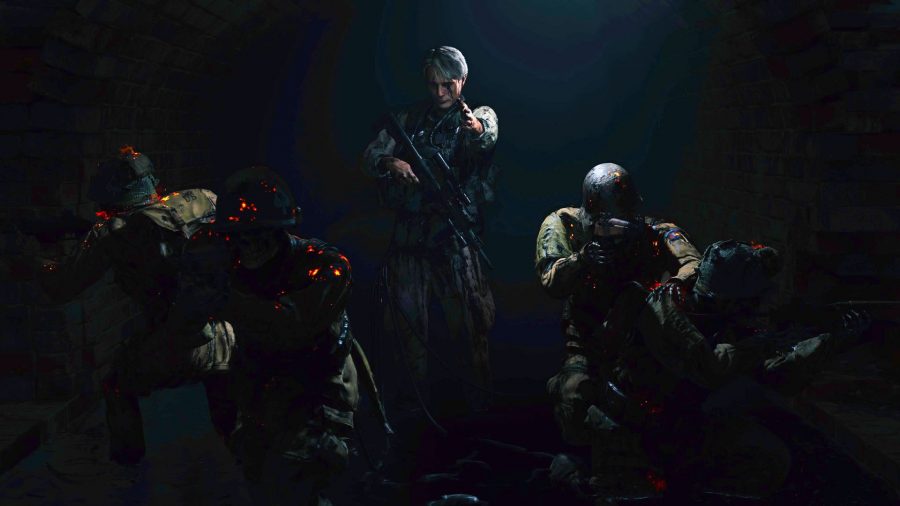 If you’re a pro shooter you still might be able to survive, but it’s a lot easier (and quite rewarding) if you move around and stealth kill all of Cliff’s goons. It’s a lot more simple here given that you have tall grass to wade through, and you’ll kill each skeleton in an instant with your Strand. Once you isolate Cliff wrap him up and then kick him when he’s down like you did with Higgs.

Cliff will then withdraw to another rally point and the hunt will begin once more. Watch for cryptobiotic trees before you chase him into the wilderness: this will help you keep your health steady in between combat. Assault Rifles will always be your best bet here, just watch out for the gooey land mines that Cliff can summon to knock you off of your feet.

Given that there are some useful structures dotted around the Vietnam map, use them as a cover when you’re getting chased and blast the skeletal soldiers from the doorway. If you can get up close and personal with the enemies you can force them into long melee attack animations too, which is useful if you’re struggling.

Keep in mind that enemies are staggered by gunshots, so as soon as you see them start to fade away don’t stop firing, as their ghost corpses will stick around for a moment and still be able to shoot you. Keep them constantly stunned and focus on Cliff and the fight will be over soon.