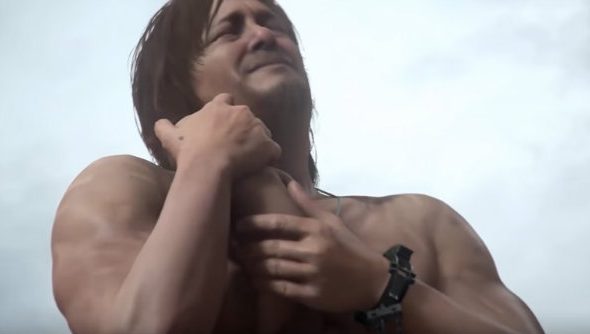 Hideo Kojima is looking to introduce a new type of action game with Death Stranding, the E3 2016-revealed project from the Metal Gear Solid creator.

In the teaser Reedus wakes up on a beach naked, attached to a nearby baby by an umbilical cord. Whales and other sea creatures litter the shoreline – all with their own cords – while floating figures watch from the skies. The baby disappears and turns into oil.

We’ve all had weekends like that, am I right? Here’s the trailer for a quick recap:

Weird, eh? Mysterious, even. And what’s with the name? Kojima shed a bit of light on this in a recent Digital Spy interview: “A strand in psychology is often used to refer to ties or chains,” he explained. “So how all the crabs [in the trailer] have this weird umbilical chord and how the baby is tied to Norman [Reedus’ character] is a representation of this.

“There’s a Japanese author I am a huge fan of called Kobo Abe. He has a short novel called ‘Rope’ in which he makes a definition, a statement: the first tool mankind made was a stick. It was made to keep away bad things. It’s a weapon.

So it seems like there will be some sort of option to damage or to help, a bit like how you can get through the Metal Gear Solid games without killing. In Metal Gear Solid 3 there’s a section where you have to walk past the soldiers you’ve killed throughout the game – if you’re killing everyone it’s a slow slog, but it’s possible to bypass this altogether by not killing.

When the first Metal Gear Solid launched, it was unlike anything else that was around at the time. Kojima hopes to replicate that with Death Stranding. “The player will be controlling Norman Reedus’ character and it will be an action game if you really want to put a genre on it,” Kojima said.

“For example, when I made Metal Gear, it was an action game but it was different because the main thing was about hiding. People eventually ended up calling that ‘stealth action’. In this game the player will be controlling Norman but by playing it they will find something different, something that won’t fit in established terms.

“I want the story and the world and the gameplay, as well as the characters in the game and the the player – the life and death elements – all to be tied together. That’s the strong theme that is in this stranding concept.”

Death Standing is still a ways off, as it’s not even entered full production just yet. The studio is still hiring for key roles and Kojima still hasn’t decided whether to use the game engine in the teaser or another one he’s considering.