Porters in Death Stranding are a lot like Sam himself – there’s a clue in his name. They deliver items to different locations, wear BRIDGES-issued suits, and hover around delivery stations, though they can be caught out in the wild. Porters are Death Stranding’s non-hostile NPCs, the opposite of Death Stranding BTs and other meanies you’ve faced so far. Unlike the hostile NPCs and creatures though, Porters are pacifists and simply want to deliver cargo, just like you – and that means you can trade with them.

You can spot Death Stranding Porters by their distinctive white suits, and you should see a ‘Porter’ tag above their head. You can like Porters by tapping the button you use to give likes to other player’s structures when you’re close to them. They’ll thank you and the way Porters feel about you will be displayed in your Bridges menu. When you come across Porters (they usually move in duos) you’ll see that they have cargo on their backs and sometimes in their hands. Here’s where it gets interesting.

How to trade with Porters in Death Stranding

Porters will usually have two types of cargo with them. They’ll either have basic items like Climbing Anchors or Ladders on their person, usually in their hands. Sometimes they’ll also have lost precious cargo on their backs that can be delivered to the designated station (if you can get the item from them).

Now you can always just run them over or batter them with your own cargo to steal their stuff, but that’s not very much in the spirit of things, is it? These people are Sam’s kin and you should treat them as such, so let’s go through how to trade with Porters so you can swap rubbish for useful items and give them a raw deal, which is still slightly evil but hey, at least you won’t be a murderer. 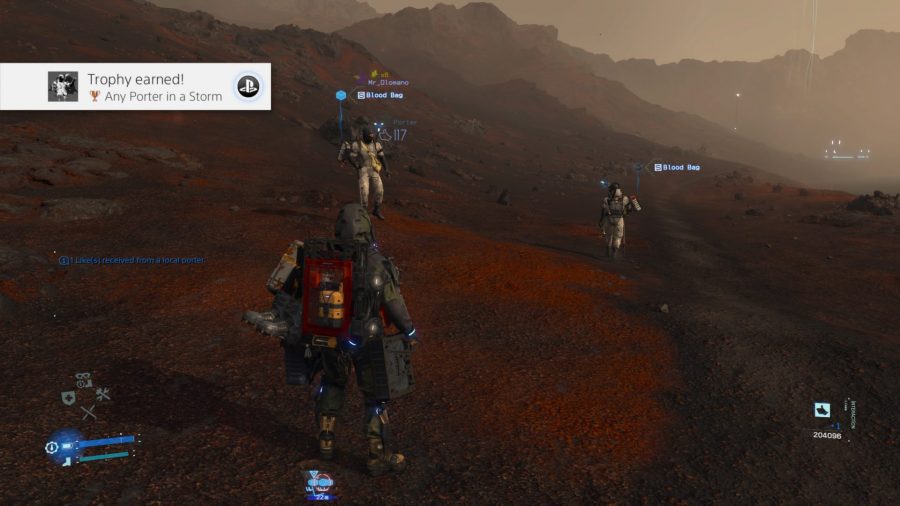 To trade with a porter, you have to enter the cargo menu and navigate to ‘Cargo’. From there, flick through the items on your person until you reach something that is either useless (a drained Blood Bag, perhaps?) or an item you know you’re not going to use. If you don’t really need it, consider trading it. Now what you want to do is select that item and select the option to carry it in your hands. Choose right or left (it doesn’t matter) and after you’ve got something there, exit the menu and return to the game.

You can alert Porters to your position and interact with them. Give them a wave and try to stop them in their tracks if possible. If not, you can always just go around their front and force them to stop by startling them. Then you want to keep the trigger tied to the arm you have cargo in held down so that you’ve got it hanging by your side. Then simply just approach the Porter with cargo in your hand and they should swap the item they’re carrying for the item you’re carrying. It’s really as simple as that. With that you should be clued in on how to trade with Porters in Death Stranding.