As the opening few acts play out you’ll no doubt realise how much easier most of these cargo deliveries would be if you could load up a vehicle full of kit and peel across the mountains. Well, in this guide, we’re going to show you how to unlock vehicles in Death Stranding and how to lean on other players for assistance in traversing the landscape.

Bikes are called Trikes in Death Stranding, so let’s get that out of the way first. Reverse Trikes to be specific, and the first vehicle you’ll find is outside of the Waystation West of Capital Knot City. It’ll be rusted to hell and broken and you’ll need to use a generator to restore its battery. This is the case for every vehicle in the game, though later Trikes and Trucks have increased battery capacity so you wont have to make too many stops.

Keep pressing through the game until you receive the PCC which allows you to build structures. Eventually, the BRIDGES gang will teach you how to create Generators. At this point you can unlock and use vehicles. You’ll be directed to spawn your first generator outside of the waystation and the trike will be unlocked, though you won’t be able to fabricate them yet.

This means that for now, this is your only Trike, so take really good care of it. You can also steal a truck from the Death Stranding MULEs in the Central Region if you want a way to complete cargo-heavy missions early on.

How to fabricate vehicles in Death Stranding

You’ll unlock the ability to fabricate vehicles in Death Stranding once you get to the Central Region. For now you’ll only be able to use Trikes, but later as you progress the story you’ll reach the Distribution Centre South of Lake Knot City and gain access to Trucks which can carry tons more cargo, making your job so much easier.

Once you’ve picked your Death Stranding vehicle you should see it appear behind you on the circular hub in the station. Open up the cargo menu to shift the load onto it and then you can drive away.

If other players have been nice and helped to pave the roads in the Central Region you’ll be able to ride on them and conserve energy. Player-created structures are on a seperate power grid and don’t drain any battery, so use them wisely and you’ll be able to cover most of the map without running out of gas. 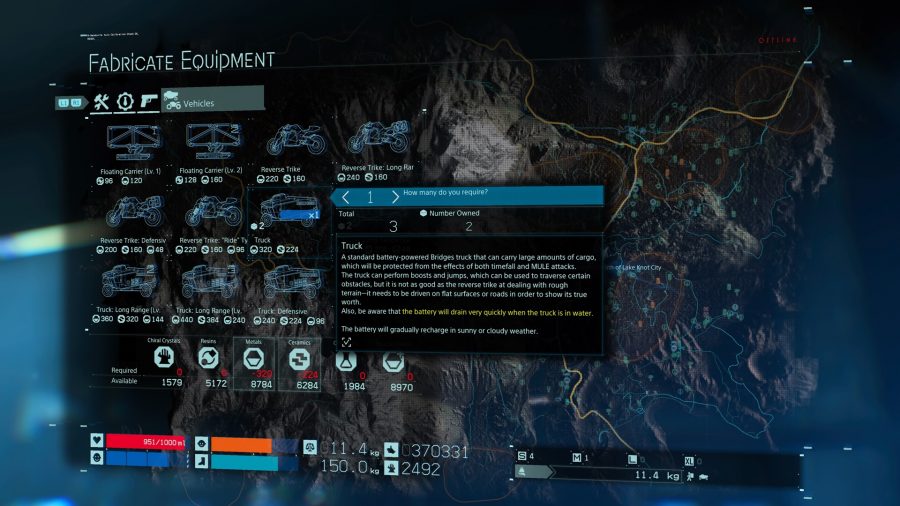 How to use other player’s vehicles in Death Stranding

First off, you can take them from the garage at any station where you can fabricate vehicles. Other players can choose to store their vehicles when they arrive at a station and pay it forward to other players. It’s well worth doing yourself as other players will give you likes simply for riding your disbanded vehicle. Open up the garage and retrieve the stored vehicle of your choosing then get to delivering.

You can also find vehicles left by other players out in the wild. They may well be in a state of complete disrepair, but regardless they may be the difference between life or death or successfully delivering your carried cargo if you’re in a sticky bind. Check your map if you’re left without a paddle and you should see one nearby.

And that’s it, how Death Stranding vehicles work in a nutshell. If you need more help then we’ve also got some handy advice on handling Death Stranding BTs, not to mention a quick primer on how long is Death Stranding, in case you’re tiring of playing mailman.