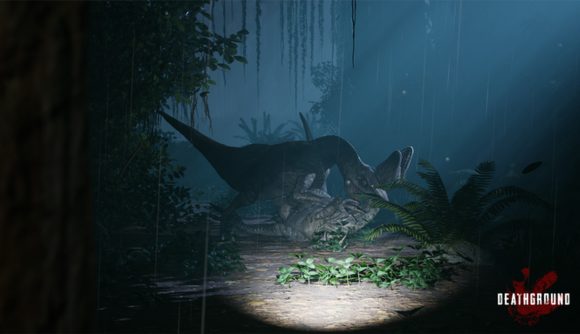 While we’re still waiting for Capcom to do anything with Dino Crisis, British indie studio Jaw Drop games is trying to step up to the dino-horror mantle with Deathground, a survival game that crosses the Capcom classic with Alien: Isolation.

The project is currently up on Kickstarter, and since funding has been going reasonably well so far, the team has released a spine-chilling gameplay teaser. In it, the player starts with a torch, exploring a seemingly abandoned facility at night. Soon, a very Alien-inspired motion tracker comes out, and the protagonist has to hide to avoid being eaten by a Tyrannosaurus Rex, or any of the smaller, but no less vicious dinosaurs that its chasing.

The portion teased feels like the velociraptor kitchen scene from Jurassic Park writ large, where you are completely helpless save your intelligence and ability to fit into tight spaces. Dinosaurs certainly don’t need any assistance feeling huge and menacing, and this just takes that to a logical extreme. The finished product will be a stealth game of sorts, by the sounds of it, in which you and your team-mates try to retrieve a specific item and escape before you’re all gobbled by dinos. Gameplay occurs in sessions, with you entering at one point, finding the prize, then seeking out your extraction point to leave, and you can play solo or co-op.

Weather will be unpredictable, and there’ll be a bunch of environments, many riffing on scenes from the Jurassic franchise, to choose from. It looks like it could be similar to Hunt: Showdown as a multiplayer game that carves out its own little niche between horror games, FPS games, and other genres.

You can find the Deathground kickstarter here. If you like your dino-action a little easier on the heart-rate, Dinosaur Fossil Hunter is the perfect alternative.