My idea of what Deathloop is has changed a lot since its E3 2019 reveal trailer. Then, I was under the impression it would be an FPS game with an omnipresent rival assassin who stalks you everywhere you go, sort of like Resident Evil 2’s Mr. X. A couple of months ago an explainer video from Bethesda left me thinking that Deathloop was going to be a triple-A roguelike. Turns out Deathloop is neither of those things, but whatever it is, I want in.

A recent hands-off look at Deathloop with Arkane Lyon starts with protagonist Colt’s death at the hands of rival assassin Julianna. The screen fades to black and then Colt springs back to life on a beach, wondering where he is, who Julianna is, who he is, and coming to the natural conclusion that he must be hungover.

As Colt wanders up the beach, mysterious floating messages – some informative, others playful – direct him to a machine pistol, which he picks up and cocks before firing a few rounds at some mannequins. Next, he heads into a bunker, picking up some supplies he appears to have some familiarity with, before making his way deeper into the bunker and along a cliff path. A piercing jingle rings out from a tannoy – Julianna introduces herself, before announcing that Colt is trying to break the loop and should be killed on sight.

After killing a few guards and learning a tiny bit more about Julianna and the loop, Colt is killed again. He wakes in fright on the same beach, picks up the same supplies, and heads off in the same direction, but this time he’s able to access new areas using information from the previous loop. 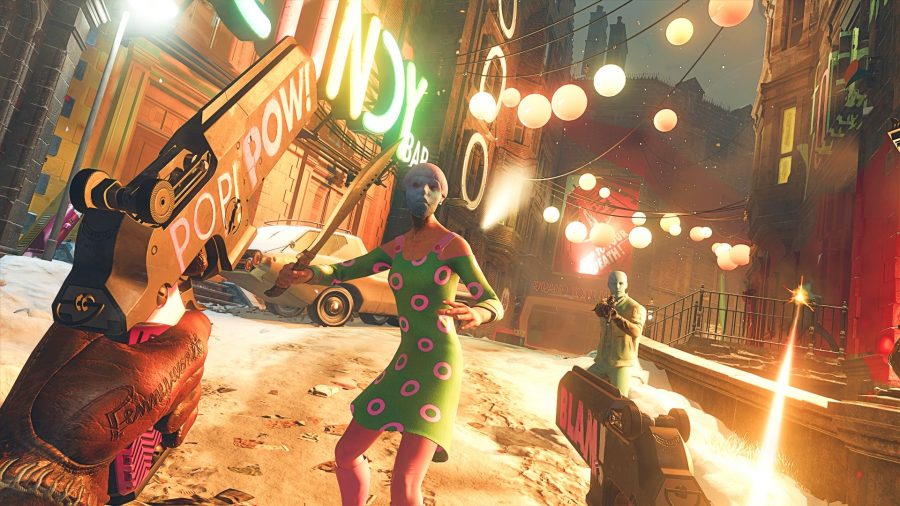 This is just the start of Deathloop. At a certain point, Colt discovers a way to skip his morning routine on the beach, and the structure becomes a bit clearer. So, what the heck is Deathloop?

all the hard work is in laying the foundations, finding leads that allow you to manipulate where each target will be

Your main goal is to eliminate eight targets across the island. Doing so will break the loop, which sees the island and its cultish inhabitants repeating the exact same day in perpetuity. This group of artists, scientists, and revellers call themselves Eternalists – they want to live forever, and they’ll kill anyone who wants to crash the party. Problem is, Colt’s trapped there with them, so he needs to kill the eight leaders before the day ends and the loop resets.

At another stage in my iterative understanding of Deathloop, I thought this might take the form of starting each day on the same beach and trying to find the perfect run over hundreds of attempts. That’s not right either. Instead, the island of Blackreef is divided into four areas, and you can visit each area during the morning, noon, afternoon, and night. By dropping into these locations at different times and hunting around for clues, you piece together the movements and motivations of each target. When you have enough information, you can manipulate those schedules to put each target exactly where you want them. 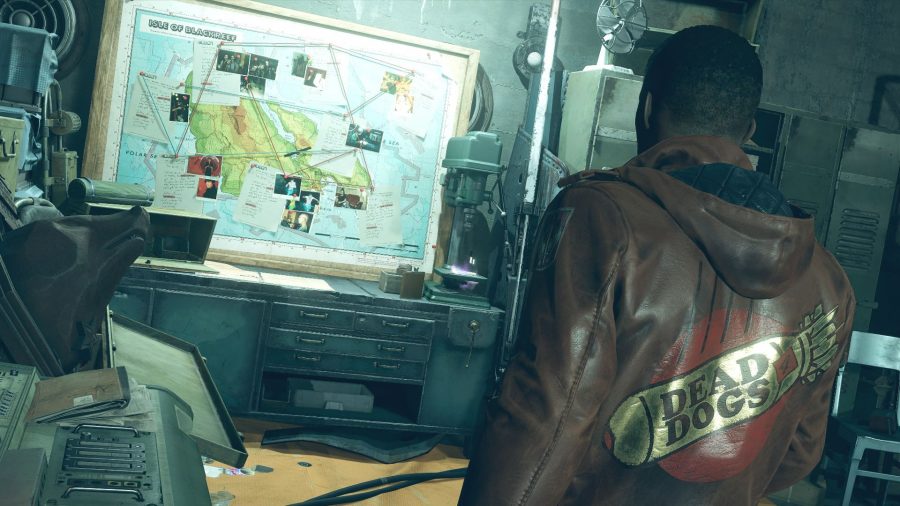 Dinga Bakaba, game director at Arkane Lyon, says all of this will prepare you to complete a final, ‘golden’ loop. Bakaba describes this as more of a victory lap than a final showdown – all the hard work is in laying the foundations, discovering leads that allow you to manipulate where each target will be, so that the act of dispatching them all in one go is almost academic.

Colt's main abilities are right out of Corvo's playbook

In one section of the demo, Colt attempts to assassinate one of the leaders, Aleksis, at his party in the Updaam district, guided by a very simple lead: crash the party. While infiltrating the fortified party house, Colt comes across a letter to Aleksis that mentions a safe (and its code) in Updaam library with a special “submission” in it, promising it will be there at noon. After getting himself killed a few moments later, the demo drops Colt back in Updaam at noon with the task of tracking down the package in the safe. This is a new area of the map to master, and after sneaking past some goons – and annihilating many more – Colt finds the safe he’s looking for, which tells him Aleksis’ exact location at the party.

Colt returns to Updaam at night for another swing at Aleksis, who he now knows will be giving a speech in the dining room. This is where we get to glimpse a bit more of Deathloop’s combat and stealth, but if you’re familiar with how Dishonored plays then you should feel right at home in Arkane’s new stealth sandbox. 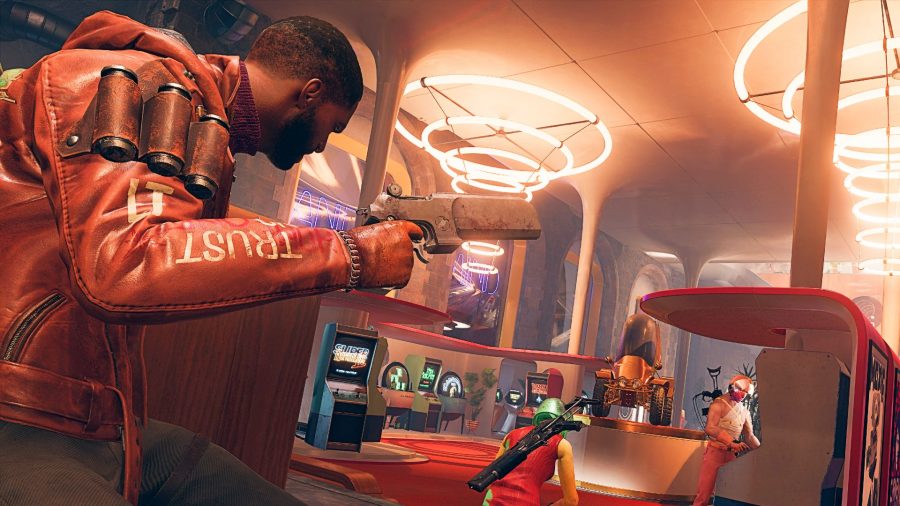 Colt’s main abilities are right out of Corvo’s playbook. There’s a short-range, Blink-inspired teleport called Shift, which is handy for getting around swiftly and sneakily. Then there’s Emily’s Domino power from Dishonored 2 (this time called Nexus) that allows you to link multiple enemies so they all share the same fate. Aether is Shadow Walk on steroids, rendering you totally invisible for long enough to sneak past a guard or turret.

Things get a little more interesting with the Karnesis ability, which lets you lift a group of enemies up in the air, before hurling them in whatever direction you choose – especially handy along the many steep cliffs of Blackreef. Havoc, meanwhile, leans into Deathloop’s more action-oriented gameplay, letting Colt absorb a lot more damage for a short period, before releasing it all back in a lethal, short-range blast.

Unlike the Dishonored games, Deathloop can absolutely be played like a first-person shooter. Colt opts for a guns-blazing approach in roughly half of the fights in the hour-long demo, using everything from akimbo six-shooters to enormous LMGs to carve a path through crowded areas. There’s some ancient Arkane lineage in the impressive force of Colt’s kick too, which can launch enemies several feet like in 2006’s Dark Messiah. Much like in Dishonored, Deathloop is all about tying abilities together to create devastating combos – Shift into a kick and your target practically ragdolls over the horizon, but if you throw down Nexus first then you can dispatch a whole huddle of Eternalists with one swift punt. 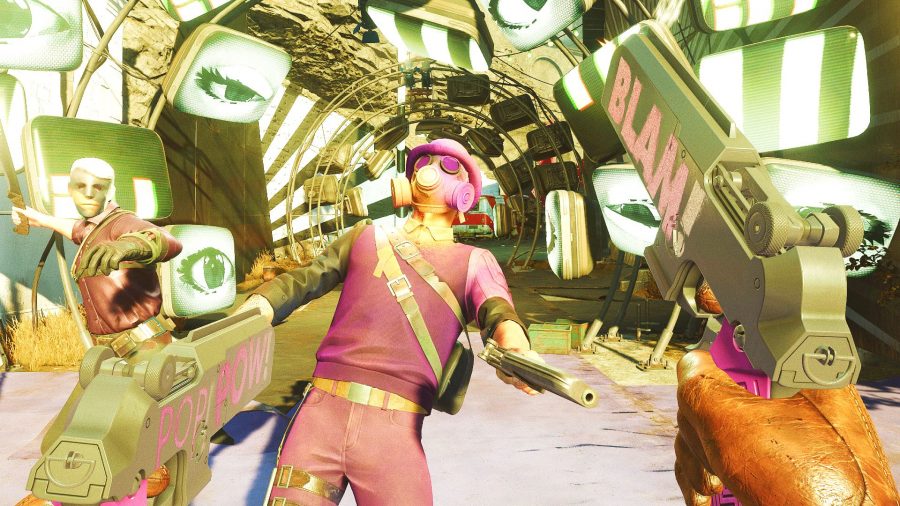 There’s loot too. Like, proper loot, with rarity tiers and sockets for upgrades, and you get to keep loot between loops by unlocking it permanently with a resource called Residium. There’s even a – and bear with us on this one, lest a certain Twitter account catches wind – Dark Souls-like bloodstain mechanic through which you drop any gathered Residium upon death, but can reclaim it provided you make it back to where you last died before dying again. And then there’s the whole rival assassin gameplay that Julianna brings to the table, although we only caught a tiny glimpse of this during the demo.

All of this suggests that Deathloop is going to be a wild, wild game. We’re only a few months away from its release date and I still can’t really picture what its first few hours will look and play like, or how it will feel to progress through its time loop. But with Arkane’s superb track record and everything I’ve seen of Deathloop so far, this is easily one of my most anticipated PC games of 2021.