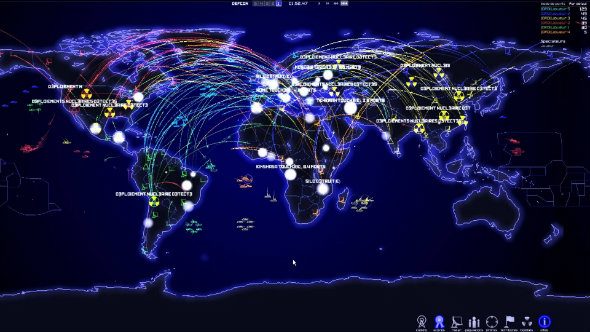 Released eleven long years ago, Defcon is still a firm favourite amongst those who want to rain down thermonuclear war on their enemies. It’s even got a thriving online community, so developer Introversion has introduced a new method to interact with them, adding a Virtual Reality spectator mode allowing you to watch other games in action.

Nuking the planet just a little too bloodthirsty for you? Try some slightly less Earth-destroying war games instead.

Sadly the VR prototype is just a spectator mode; there’s no actual way to ask other players “Would you like to play a game?” (lame Wargames pun for us oldies). It’s a large virtual war-room, but you can see other spectators, represented by a floating head and hands. You can also engage in a bit of chair-throwing just for fun, but be careful you don’t accidentally hit the red button.

Grab the free prototype from Steam, which works on both the Oculus Rift and HTC Vive, and watch the world burn from the comfort of your underground VR bunker.