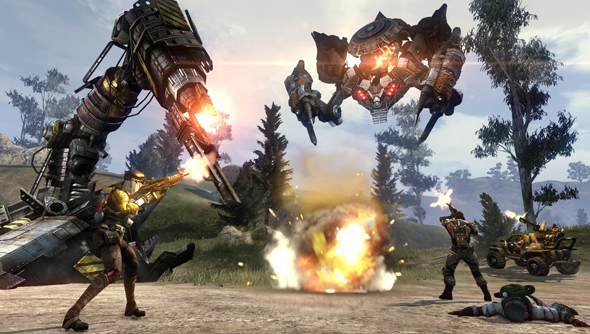 This summer, Trion’s MMO, Defiance, is shuffling off its subscription coil and joining the good ship free-to-play. From 4 June the game will be open for all to play. The change happens just in time for the launch of the tie-in TV series’ second season, a move that Trion are no douby hoping will coax in a ark-full of new players.

Trion have detailed what exactly freebie players will be getting and what subscribers will receive as a reward for their good service.

Free-to-play players will have two character slots, two loadouts, an inventory with only 35 slots, and an ark keycode maximum of 50. That gives you enough rope to get involved with the game but if you click with Defiance then you’ll soon need to look into paying Trion to keep expanding your character’s powers.

Now, if you already own Defiance you’ll find yourself running a buffed account. Four character slots, five loadouts, 70 inventory slots, a ark keycode limit of 75, and a free grant of 1,000 arkforge. On top of that you’ll also get a 30-day patron pass.

The patron pass is the residual subscription that remains. It gives you these puppies:

Trion have detailed the changes to Defiance over on their site. They explain their reasoning for the shift as “Free is better! As we head toward Season 2 of the Defiance television show, we expect that many new fans will want to join the world of Defiance, and having a system that allows them to experience the Defiance universe for free is good for everyone.”

It would be fascinating to see how much uptake there is from the series to the game. This free-to-play shift does open the gates for anyone vaguely interested in Defiance from watching the programme to start playing immediately.

There’ll likely be further reveals and details coming later this month of what’s coming in Defiance before the shift to free-to-play.