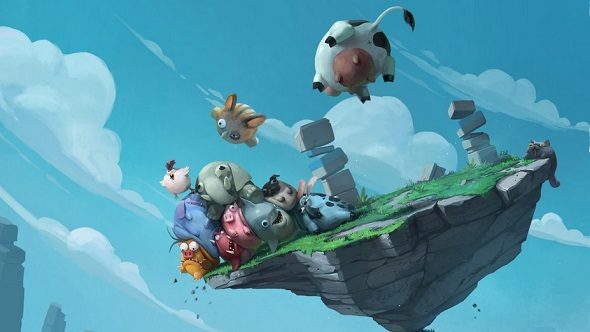 While receiving a short delay on its eventual release, Ready at Dawn have announced that their competitive physics battler Deformers will be receiving a Steam open beta in the near future. First planned for a release on Valentine’s Day, this multiplayer game has players rolling around as creatures made of jelly, trying to squash opponents and send them flying out of an arena perched on top of a massive leaning spire.

In a post on the Deformers website, Ready at Dawn thanked all their alpha and technical testers for “hammering on our updated network infrastructure” and testing new features like online matchmaking and new game modes. The data gathered from these tests are what caused Ready at Dawn to “make the tough call on slightly delaying the February 14 launch of Deformers so we can spend more time addressing your feedback.” The delay does allow the team to “gather additional feedback and invite others to try out Deformers,” so it’s probably best for the future of this odd mix of Rock of Ages, agar.io and a trip to the zoo on LSD.

It should not be too long before the revised release date and Steam open beta is released, so keep your eye on Ready at Dawn’s website for more information. Do check out the announcement trailer for Deformers above, if you want to see these odd gelatinous beings inflating, deflating and smashing into each other at high speed.