Monitor stands are rubbish. No matter if you’ve got a beautifully-designed display in all other regards chances are the thing that keeps it upright on your desktop ruins the whole aesthetic. So, what about ditching the stand altogether?

Read more: check out our guide to the best gaming monitors of today.

Dell’s UltraSharp 27 Infinity Edge monitor, or U2717DA to its friends, uses a flexible, adjustable arm, clamped onto your desk, to lift the screen off the surface giving a more minimalist feel to your gaming space. It’s a simple change but it can make a big difference to your desktop, especially if you’re not otherwise blessed with a lot of real estate for your keyboard and mouse to roam across. You can purchase separate, third-party monitor arms to fit the VESA mount on the back of your existing screen, but they can be expensive and awkward to set up.

Want to get to the good stuff quick? Use the quick links below to jump to the performance or all-important verdict sections.

When we’re talking about big-screen monitors – 27-inches and above – they need sturdy, broad stands to cope with the size of panels they’re tasked with holding up. Unfortunately that often means they’re designed for function over form, and if they are created with any design flair it’s usually to fit a ‘gaming’ aesthetic which seems to favour sharp angles and/or mutlicoloured LEDs.

If you’re after a simple, clean look to your gaming space though the $720 (£536) U2717DA’s flexible arm keeps the display rigidly attached to your desk while letting it seemingly float above it. Inevitably there is a certain amount of movement when you’re bashing away at your keyboard or slamming your mouse down in frustration, but because of the necessarily stiff joints it’s not much more that you’d get from a screen with a chunky traditional stand.

The neatly-designed arm also contains easy cable-routing sections, beneath a magnetically-attached fascia, to keep trailing leads out of the way too. It’s mounted using a simply screw-in mechanism, and with only around 1cm of the clamp standing proud of the desk it can be used when there’s not a whole lot of space between your surface and the wall it’s sat in front of. It only takes a minute to set up, with a simple one-click connection to the VESA mounting point on the rear of the panel itself.

In terms of that panel Dell have used a Samsung PLS screen in the U2717DA, which is IPS by any other name. The native resolution is 2560 x 1440 giving a pixel pitch of 0.2331mm and a crisp, clean image. Because it’s not strictly a gaming monitor, the U2717DA only has a standard refresh rate of 60Hz – none of the lovely smoothness of a 165Hz screen here. 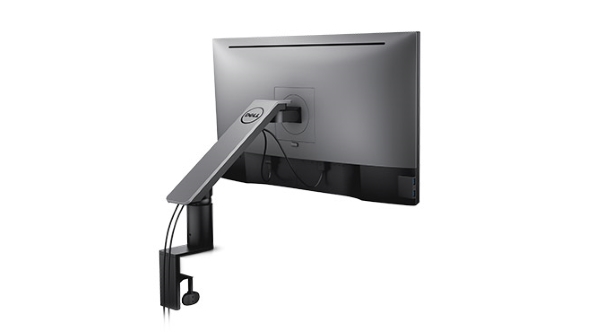 Because it’s a Dell monitor it’s sporting a quite lovely panel, delivering beautiful colours and typically strong viewing angles too. Out of the box it’s maybe a little dull, but knocking the brightness up from 75% to 80% goes a long way to fixing that and makes everything seem just a little fresher.

Pushing the brightness up a notch doesn’t negatively impact the performance of the panel either; the white saturation is still top-notch and the black levels mighty impressive for an IPS-like display. It’s also got almost immaculate contrast levels at the factory default settings. A small adjustment of the monitor’s contrast settings though can seriously affect things like the white saturation, blowing out the high-end and losing detail in brightly-lit scenes. If I was being very negative I would also point to the slight banding which is visible in what should be smooth gradients – in practice though this is something you won’t really notice in-game.

But the Dell U2717DA isn’t really a gaming monitor, which is why there’s no the FreeSync/GSync feature, or the high refresh rates we’ve maybe come to expect from screens at this price point. With a panel that’s capable of 99% of the sRGB colour space though you do still get a great experience in-game. The Mediterranean idyll of Sapienza looks bright and vibrant on this panel and the same goes for a blood-soaked San Andreas too. And even though the reported 8ms typical response rate might seem slow when panels like Asus’ PG248Q sport 1ms response times, I have no issue with IPS timings. If you are particularly susceptible to non-TN response times though – maybe you’re a pro-gamer where every millisecond counts – this screen likely isn’t for you. 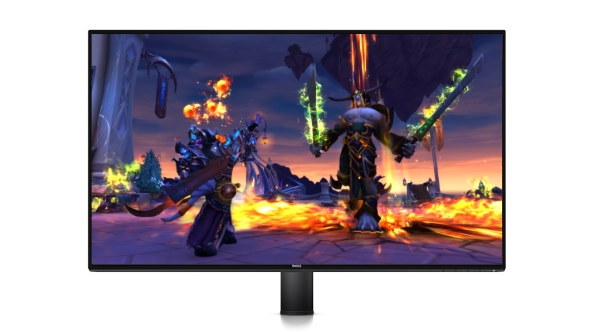 The Dell U2717DA is a very understated monitor. Everything about it is restrained, from the simple, recessed 7.3mm bezel to the mostly anonymous stand. And that’s to its credit. You don’t want to be distracted in-game by showy LEDs, chunky bezels or massive stands getting in the way of your mouse and keyboard.

But because of its tag as a professional-class display the price of the U2717DA is rather prohibitive, especially when we’re talking about a 27-inch IPS monitor with a 2560 x 1440 native resolution and none of the gaming features we’ve grown to love. I bet there would be a lot of people prepping their ‘meh, no GSync’ comments even without the $720 (£536) price tag, as it is then it’s almost pricing itself out of contention.

Which is a shame as having used this screen with its simple, sturdy, flexible stand, I’m utterly sold on ditching the standard monitor base in favour of a floating arm.