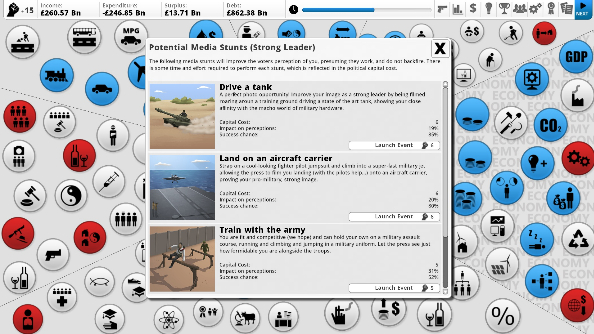 There’s never been a more suitable climate for a new Positech Democracy game. In the USA things are reaching fever pitch with the Presidential elections as people scratch their heads at the thought of voting for the variety of colourful candidates. Across the Atlantic, the UK is preparing itself to say yay or nay to remaining in the European Union. If you’d rather forget all that but remain political, then Democracy 3: Electioneering is for you.

Keep it publisher-free with the best indie games on PC.

The add-on, which will release in July, emphasises the importance of your election campaign. A key element is manifesto promises: while your policies may draw in voters on paper, unless you follow through on them when you’re in power you’ll find that your supporters begin questioning their choices. To hold onto them, you’ll need to deliver on your promises.

Do your best to woo supporters and you can start to raise funds from party donors, with the money naturally bolstering your war chest.

You can also go all Malcolm Tucker by hiring spin doctors, who can ensure your publicity stunts (visiting poor ickle orphans or training with the national heroes in the army) make the front-page news. This helps influence voter perceptions of you. You’ll also be able to take to the podium in front of various demographics and give speeches tailored to win them over.

The whole thing is wrapped up in an improved version of the Democracy 3 UI, which should help make your time in office (somewhat) less painful.

Democracy 3: Electioneering will be available from Steam in July, priced $5.99.