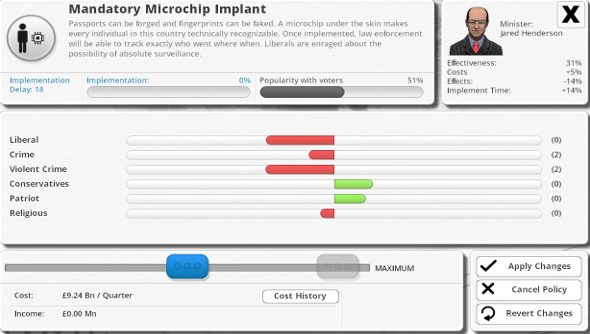 Democracy 3 is jumping into the near future and turbulent times with the Clones and Drones expansion, which dropped today. Future techs and new social issues rear their heads, adding more to the charts and numbers that spin grim political yarns. At least, the yarns are grim when I’m playing, and ruining the country.

The future doesn’t seem too bright.

“The population of earth is predicted to hit 9 billion in 2040, up from 7 billion today. Climate change threatens the food supply on which those 9 billion will depend. Meanwhile Technological growth threatens to put tens or even hundreds of millions out of work, and an over-use of antibiotics means we may soon see widespread resistance to them and a resurgence of once forgotten diseases. Combine this with a stock market now increasingly controlled by computers, wars increasingly waged by machine and the future looks more uncertain than ever.

“Into this chaos steps YOU. As newly elected president, you have these problems in your inbox on day one.“

Dear me, that’s a lot of pressure to put on one person’s shoulders. Democracy 3 always throws up one crisis or another, some big important decision that needs to be made, and Clones and Drones expands that list of problems and policies by quite a bit.

The different groups that make up your chosen country will react differently to the new policies you try and ram down their throats. Support human cloning, and the conservatives will start to question your leadership. Employ drone strikes, and you’ll start losing your liberal supporters. You can’t please everyone.

You can grab the expansion direct from Positech, on Steam or through the Humble Store for £3.99/$4.99.