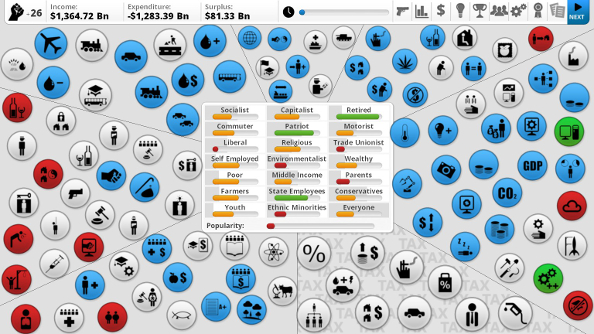 You’ve probably heard of Donald Trump. He’s known for, among other things, being a billionaire real-estate mogul, the boss on the US version of The Apprentice, the fellow who upset lots of Scots with his golf course, and the guy who wears a guinea pig on his head. He’d also quite like to be America’s next president.

If you desire more interactivity from your wannabe President, check out the best Donald Trump games on PC.

Like a lot of people, I often ponder what Trump would do in any given situation. Would he buy this new DLC expansion? Would he eat this pancake I’ve just made for breakfast? Would he approve of the funny wig I’m thinking of buying for a fancy dress party?

The truth is, I can’t answer those questions. But through the magic of Democracy 3, I might be able to find out what he’d be like should he get into power.

Democracy 3 is a political simulator bursting with charts, graphs, crises and political conundrums. It doesn’t quite capture the intricacies of different systems of government, but it’s fat with options and, importantly, modern, so it contains a lot of the political issues that America’s Next Top President will have to deal with.

First things first: I need a smart suit and a new haircut. 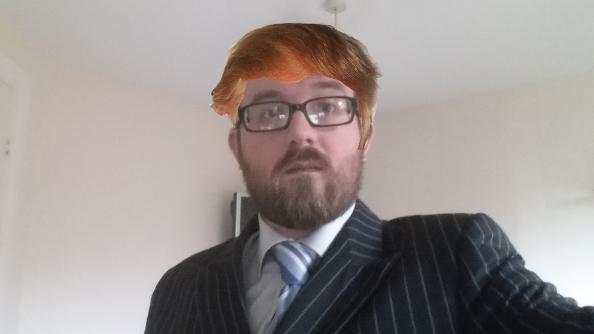 I’ve also rooted around on the internet, reading interviews and hunting down Trump’s views on everything from gun control to marriage. I’m all up in the man’s head. Earlier today, I made people refer to me as Mr. Trump. This is serious business.

I enter the Oval Office, conveniently situated in my flat in Paisley, Scotland, and immediately fire the sofa to assert my authority. There are more important things to worry about than furniture, however, as I have policies to make, lives to improve and a country to rebuild. 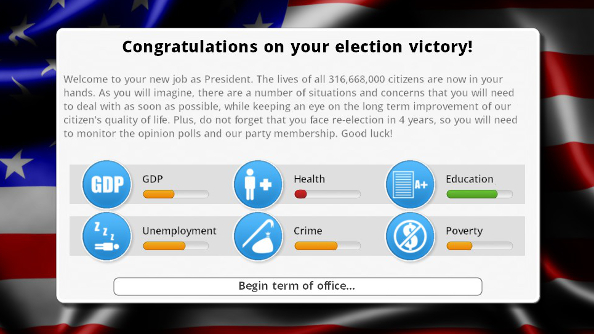 Where to begin? I reckon that Trump isn’t a man who messes around. He confronts his fears. That’s why my first order of business is solving immigration. Trump is terrified of Mexico, and he dreams of a great wall blocking any entry from the south. Time to make that dystopian dream a reality.

America already has some fairly robust border controls, but it’s just not good enough. There are illegal immigrants slipping through, and they are taking jobs from hard-working Americans, regardless of what the statistics show. The horror. To ensure the security of this wonderful nation, I double the budget and make sure the border is jam-packed with armed guards.

Lamentably I’m not actually able to build an actual wall, nor is there a way to make Mexico pay for it. This is actually what Trump wants to do. He wants to build a huge wall on the border, and then make a much poorer country pay for it. This was probably not even considered when Cliff Harris made Democracy 3. 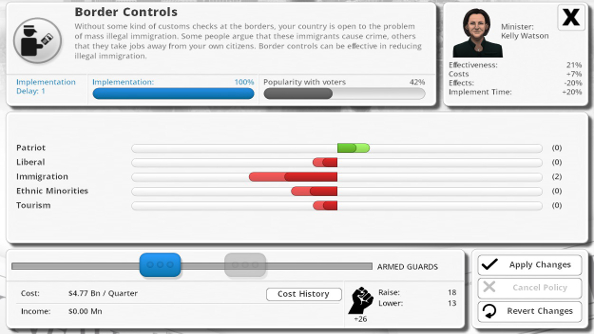 Anyway, the guards get sent out and the Patriots, one of Democracy 3’s voter groups, are quite pleased. Ethnic minorities and Liberals, less so.

I get my first quarterly report, and things aren’t looking great. While the budget is doing ok, despite my completely rational decision to spend lots of money on border security, it looks like only old people and the Patriot voter group actually like me. An online campaign against me has also started.

A new law has been proposed. It looks like debt collection agencies, normally everyone’s favourite businesses, have been getting up to no good, aggressively extracting money from people after providing credit to them when more reputable places would not. The proposed law would limit their activities.

“Nonsense!” I yell, before mumbling something about the free market and personal responsibility. Time for me to flex my muscles and shut down this clearly terrible law.

This inspires my next big decision. Trump’s a fan of the free market, but one where America is protected. It’s a free market until you cross the border. Outsourcing and cheap imports are two things he’s not a fan of, unless he’s the one outsourcing or bringing in said cheap imports. He’s a cheeky pragmatist, that Donald Trump. I show everyone, especially foreign businesses, who the boss is by slapping down some import tarrifs, protecting domestic companies, the global economy and international trade be damned. 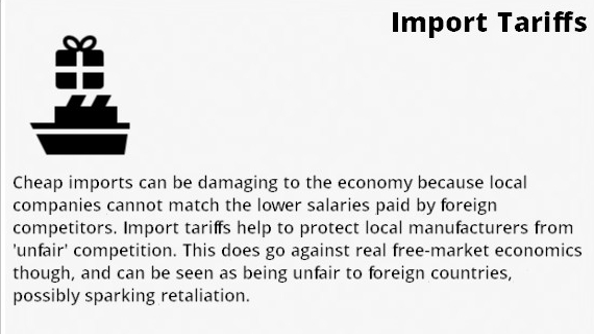 What I really need to do, however, is get people to like me again. I’m already thinking about the distant election, the boos, the throwing of rotten vegetables – I need to win back the electorate’s love. I take my oversized scissors to taxes, cutting income tax, and taxes for businesses big and small. I’m never going to make everyone happy, but the tax cuts certainly make Donald Trump a lot of new friends. None of these friends are people who have to worry about the Federal budget, however.

There’s a deficit now, and Donald Trump has made it very clear that he would never add to thedeficit. This would not do at all. I can imagine him, flushed of face, hairpiece bouncing around, trying to escape this volcano of anger. I can imagine him firing me for being a bad digital Trump. I do the only sane thing I can do: I legalise drugs. All of them.

While the legalisation of drugs, or at least certain drugs, tends to be a liberal position, Trump sometimes appears to be very much for it, but he flip flops a lot. Recently he said that he’s pro-medical marijuana, but not full legalisation. The one thing that remains consistent is that he think’s that states should have the right to make that decision themselves, as long as the now legal drugs can be taxed. That position can’t really be reflected in Democracy 3, so what the hell, everything is legal.

LSD, heroin, cocaine – America’s about to have a very big party. 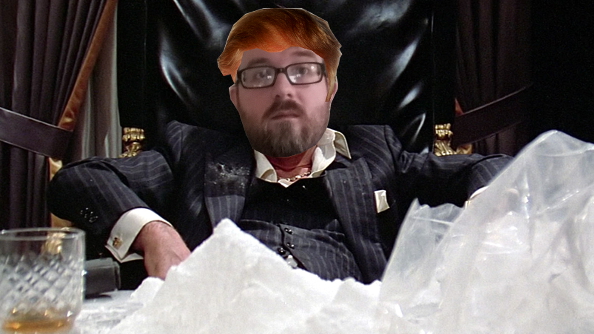 Okay, so the drugs thing hasn’t really worked out. It will take more time for it to have a positive effect on the economy, and in the meantime, America is in the grip of an addiction epidemic. An organisation known as the ‘Black Power Group’ is also becoming popular and threatening the government.

However! Violent crime is actually down, and I’ve made sure that’s all the administration is talking about. What a success story!

I’m keen to run with this, making the continued reduction of crime a top priority. Research has shown that, generally, a criminal’s weakness is their fleshy, vulnerable body. Knowing that Trump is an ardent supporter of the Second Amendment, to the point where he “would not be opposed to arming teachers”,I reduce restrictions on firearms entirely, saving money and ensuring that everyone has access to deadly weapons.

Crime won’t know what hit it.

It’s a bullet. A bullet is going to hit it. 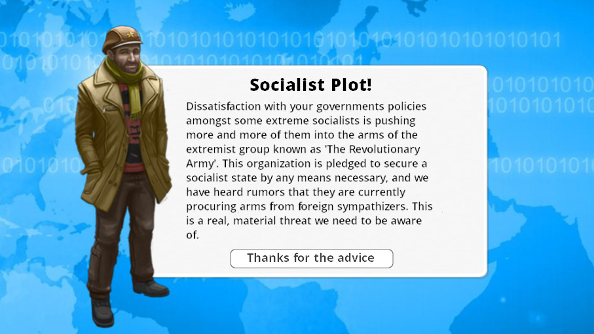 Oh dear. My plan to arm the nation has proved to be… ill-advised.

A socialist revolution is fermenting, as this ‘Revolutionary Army’ is gathering support and weapons in an effort to create a new socialist state. Why did I let everyone have guns? Oh yeah, and crime is now on the rise. Even my good work is being undone. It’s almost like selling people all sorts of guns might not be the safest policy, but I’ll be damned if I back down.

Every effort was being made to cut spending when the unthinkable happened: an assassination attempt. The failed assassination wasn’t made by The Black Power Group or The Revolutionary Army, it was made by a brand new group seeking to end my glorious reign: The Socialist Army.

Everyone is against me now. I can see them, skulking in the shadows. You’re fired! I’ll fire them all.

I’ve lost two members of my administration and assassination attempts are now so commonplace that I have to get my aid to pencil them into my diary. America’s credit rating has also been downgraded, as my tax initiatives prove to be not particularly well thought out. With everyone either jumping ship or out to get me, I’m convinced that only by investing in intelligence, police and the military will I make it through my term.

Unfortunately, I no longer have the political influence I need to do anything. I’m a president without power. I had a dream of slashed subsidies, private prisons, education cuts, a bigger military budget, lots of really cool drones and humongous wall to protect us from the rest of the world. Sadly, it was not to be. 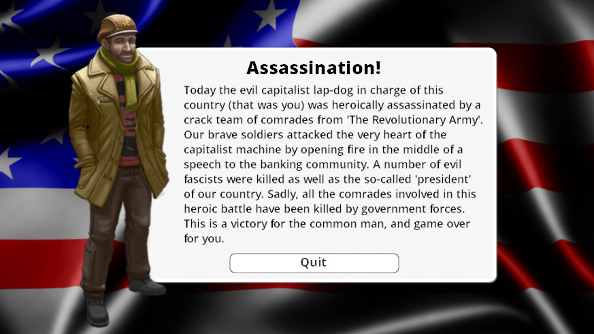 Well, there you have it. A short reign punctuated by assassination attempts and, finally, murder. A slightly dark end for what was meant to just be a bit of fun. Maybe our pal Donald should play a bit of Democracy 3; it might change his mind about running for office.