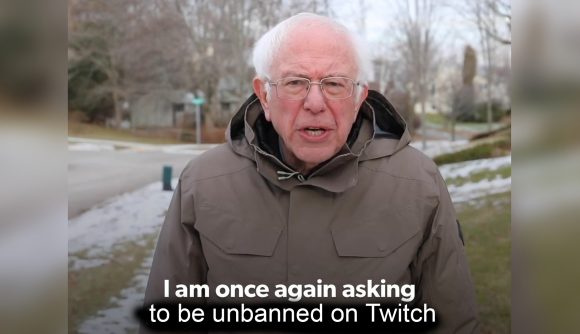 Last night, a number of Twitch streamers received temporary suspensions after DMCA notices over their rebroadcasts of the recent US Democratic debate. Their accounts have since been reinstated, and after a number of concerns were raised about the legitimacy of the DMCA claims, Twitch has confirmed that they were made under false pretenses.

Streamers like BadBunny reported receiving DMCA claims from an organisation Praxis Political Legal, which claimed to be working on behalf of CBS News – the official television broadcaster for the debate. The Praxis Political’s official website disappeared as users began to look into the company. Today, we sent an email to the address formerly listed on the site, looking for comment – the message came back undeliverable.

“Twitch processed notices upon receipt last night based on its established DMCA policy,” a Twitch representative tells us. “This morning, Twitch began an investigation into the authenticity, and has determined that the alleged copyright infringement notices directed to channels from Praxis Political are false. Twitch has reinstated access to each account and removed any strike attributed to a channel in connection with the notice, effective immediately.

“We regret that a false notice from a 3rd party disrupted any of our streamers and appreciate all who alerted us to the concerns about Praxis Political. The safety of our community is a top priority and it is unacceptable to target folks with false claims. The investigation continues as to the actor that submitted the notices.”

I and many other partnered @Twitch streamers were just banned with DMCA strikes for broadcasting transformative content of the presidential debates.

These were *fake* strikes issued by a domain created 2 weeks ago.

Twitch offers NO protection for streamers here. This is absurd. pic.twitter.com/BiUZSp9Uyt

Bots like StreamerBans have reported that the affected streamers have been reinstated as of Wednesday afternoon. The bogus Democratic debate bans are over, but not before we got another reminder of how harshly automated DMCA responses favour copyright holders over individuals – even when those “copyright holders” aren’t real.